Before beginning this review, I should point out to any impresionable folks who may read my stuff that when I implied that, at the end of my Deadpool review, I gave that movie a rating of 10/10 because 20th Century Fox paid me to do so, I was totally joking. The rating is the least important part of the review to me, and  I would never compromise my journalistic integrity or whatever by accepting money and other rewards from studios, even studios owned by the benevolent genius that is Rupert Murdoch.

Now if you’ll excuse me, I’ll be stuffing the Best Picture ballot box with votes for The Revenant, easily my favourite picture of the year. And after doing so, I will absolutely NOT be taking a ride in my private jet with the FOX logo plastered on its side, accompanied by a harem of hookers and mountains of blow.

Plot: When a Soviet spy (Mark Rylance) is captured in the United States during the tail end of the McCarthy era, insurance lawyer James B. Donovan (Tom Hanks) is assigned to be his legal counsel. It goes about as well for them as you would imagine.

However, when American U-2 pilot Francis Gary Powers is shot down and captured by the Soviet Union, Donovan, the humble insurance lawyer, is sent to East Berlin in order to negotiate a prisoner exchange with the Soviets… If only it were that easy…

After the terrific, unrewatchable masterpiece that was Lincoln, god-tier director Steven Spielberg laid another Oscar-nominated Cold War drama on us before he releases a couple blockbusters in the coming two years (BFG and Ready Player One, both of which I’m quite excited for). Factor in Tom Hanks as the lead role, the goddamned Coen Brothers (!!!) on script-writing duty and the great Janusz Kaminski, Spielberg’s pet cinematographer (or as I like to call it, “the Lubezki to Spielberg’s Iñarittu”) and you have all the makings of a great movie, right?

Well yeah, it’s a really good movie, I could’ve told you that without seeing it. However, it’s one of those movies that’s really, really good without ever really having one aspect about it that I would consider “great”, if that makes any sense.

Actually, I take that back. Damn I’m an idiot. If only there was so way to go back and edit that last paragraph. Oh well, such is life!

The three things that I would consider “great” about this movie are Spielberg’s direction (duh), Mark Rylance’s terrific performance as British/Soviet spy Rudolf Abel and Janusz Kaminski’s cinematography.

Actually, Kaminski’s cinematography is both one of the better and stupidest aspects of this movie. I mean, it’s technically terrific (it’s Kaminski, after all), but the fact that the “Free World” is painted in warmer colours while  East Berlin is coloured in shades of cold, dull blue. Maybe this shouldn’t bother me that much, because life in East Berlin was kind of a shit show, but in a movie that tries to present a theme of negotiating some semblance of cooperation between two enemies out of respect for all human life, it kinda defeats the purpose to show one of the sides as being a total crap hole, while showing the other side as being, well, not so much.

Tom Hanks is very good in the lead role (though he’s not about to make us forget about how badly he was snubbed for Captain Phillips), but as solidly, dependably Hanks-ian as he is, he’s overshadowed by the aforementioned understated performance from Shakespearean thespian Mark Rylance. He makes every scene he’s in infinitely better, and really embodies the humanity of a character who, fifty years ago, would’ve been laughing maniacally whilst stroking a cat and watching James Bond try to escape from a death trap.

Jaws was about as sympathetic as it got for a while.

As for the Coen Brothers, they haven’t written a bad adaptation of the story here. It’s absolutely a good, solid script, and anybody would be proud of it. The thing is, you could not tell that they wrote it until you looked up for yourself who had written it before doing a double-take when the Coen Brothers are credited. I suppose it’s true that their significant style would’ve been lost to both the fact that a highly controlling, stylistic director is in charge of the final product, and the act that inserting Coen-tropes into a story that’s actually based on true events… 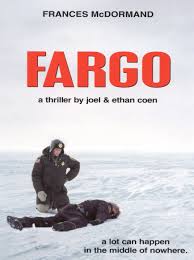 …As opposed to whatever bullshit they tried to pull with Fargo…

… Could easily come across as WILDLY inappropriate.

One of the only real flaws that I found in Bridge of Spies is the fact that it kind of struggled to hold my attention at around the end of the second act. There’s only so much of Tom Hanks running around Berlin, talking to different people with European accents that I can take before my mind starts to wander. Also, aside from some really cool character moments, at no point was I really under the impression that I was really getting anything from Bridge of Spies that I couldn’t have simply looked up on Wikipedia. Don’t get me wrong: Given the choice, I would gladly watch Bridge of Spies before I did any kind of research, and as far as on-screen book reports go, it’s a very good one. It’s just not an extraordinary, or even particularly special  one, and not one that’s probably going to be considered an essential part of Spielberg’s filmography.

There you go, Bridge of Spies… You get to sit riiiiight  beside Amistad. Yeah, that seems about right.

Overall: It’s a satisfying, technically proficient and overall very good film, even if it doesn’t really rank among Spielberg’s best.

“Can I sit with Amistad and Bridge of Spies???”

NO. YOU STAY WITH CRYSTAL SKULL UNTIL YOU REALIZE WHAT YOU DID WRONG!