Holy shit, it’s been a while, hasn’t it?

To be fair to myself, you try to write two papers and four exams in a three-week period and still have the energy to post a Bridge of Spies review and/or X-Men profile that deftly incorporates insightful critiques with an overwhelming amount of F-bombs and dick jokes. Not so easy, is it (please don’t respond to me if you do find it that easy).

Anyways, here’s a movie about a pansexual gun for hire and the girl he loves.

Based on: Deadpool by Rob Liefeld and Fabian Nicieza

Plot: Wade Wilson (Ryan Reynolds) is a not-so nice Canadian guy making a living as a mercenary in New York City, living a fairly idyllic lifestyle with his girlfriend Vanessa (Morena Baccarin). However, his life is torn apart at the seams when he is diagnosed with what can only be appropriately described as “all the cancer”. Desperate to cure himself, Wade unwillingly becomes a human guinea pig for the sadistic Ajax (Ed Skrein). During the experiments, he is horribly disfigured, but is given an incredible healing factor, superior to that of Wolverine. Upon escaping his captors, he sets off to seek vengeance upon those who wronged him.

Deadpool is my second favourite Marvel Comics character after Spider-Man, so needless to say, the long development hell that appeared to have killed the project did not exactly sit well with me, as well as the legions of fans who read the comics and cosplay as the character to an obnoxious degree. Ryan Reynolds’ performance as the character in the otherwise awful X-Men Origins: Wolverine was a bright spot , at least until 20th Century Fox’s Head of Studio Meddling decided to rear its ugly head in the last act, turning the talkative, obnoxious Merc with a Mouth (Emphasis on “MOUTH”) into whatever the fuck this is:

And on the day he saw X-Men Origins: Wolverine, this is the moment that thirteen-year old Kenny Rollins quietly retired to the washroom and blew his own brains out.

The uncertainty that followed the character assassination of Wade Wilson in Origins, fans watched impatiently as, despite Ryan Reynolds’ best efforts, the Deadpool solo movie once again languished in development hell. And then, some beautiful soul at 20th Century Fox (*Cough* Ryan Reynolds *Cough*) leaked test footage, and the positive reaction prompted the studio into action and, long story short, the movie we’re reviewing today is the result.

And as it turns out, it was well worth the wait, because Deadpool is fucking amazing. It’s hilarious, the action is fantastic, and the cast absolutely rocks it. Seriously, everybody reading this should go watch it immediately.

I mean, finish reading this review, obviously, and maybe leave a comment if you’re so inclined, but after that, buy your goddamned ticket. If Deadpool isn’t being shown to children the second they become old enough to appreciate art, then we will know that we have failed as a species, and deserve to be wiped off the face of the Earth by our lizard overlords.

On an unrelated note, B.o.B. has lost his damn mind, and I fucking love it.

The biggest thing this movie has going for it (And believe me, it has a lot of stuff going for it) is its star, Ryan Reynolds. Reynolds as Deadpool, on paper, sounds like ideal casting. Sure, his choice of movies has been questionable, at best…

Fuck you, Me! Van Wilder is a goddamned classic.

(Oh boy, remember Tara Reid? That sure was kind of a thing, wasn’t it?)

… But he has the snarky charm to theoretically pull Deadpool off. And he’s enthusiastic about the project too, and played a big part in the ingenious marketing campaign. However, there was always the possibility that the performance promised in the ads didn’t quite translate to the final prod- Oh, who the fuck am I trying to kid? Ryan Reynolds is phenomenal.

Obviously, he’s hilarious, that much is obvious to anybody who’s seen the commercials, and can very easily play the snarky dick that Wade Wilson is. However, he also knocks the dramatic moments (yes, there are dramatic moments in Deadpool) out of the park. His relationship with Morena Baccarin (who’s also great, lest I forget) could’ve been real weakness for the movie, serving only whatever purpose the plot dictated. Because Reynolds and Baccarin are so sweet and believable together though, their relationship is a really welcome part of the plot.

Although personally, I ship Deadpool/Weasel.

The supporting actors also do their part, with T.J. Miller being awesome and Ed Skrein being more than menacing enough as Ajax. Two of my favourite characters were the two X-Men representatives, Colossus (Stefan Kapicic) and Negasonic Teenage Warhead (Brianna Hildebrand).

Every time that name is read in full, my faith in humanity is restored, bit by bit.

One usually thinks of Wolverine or Cable as being the designated foils for Deadpool, so the inclusion of Colossus, as awesome a character as he is, could’ve been seen as puzzling. It actually works really well though, because Colossus, morally speaking, is essentially Russian Superman. 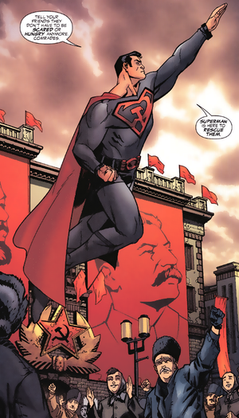 Meanwhile, Deadpool is very much not your traditional hero, which makes it fun to see Wade and Piotr’s outlooks clash.

Deadpool‘s sense of humour is very faithful to that of the comics, in that it’s very violent (Veeeeeeery violent), crude and self-referential, to the point of plowing through the fourth wall like it was made of rice paper. Does it really make any sense that he would know that he’s in a comic book movie? Hell no.  Do I care? Hell no. Deadpool has always operated by the Rule of Funny, and with comedy as on point as the comedy found in Deadpool, I couldn’t give less of a fuck about the logistics of awesome, awesome metahumour.

On top of the humour and performances, the superbly directed action and amazing soundtrack make the movie all that much more enjoyable for me. If I had to nitpick-I mean, reeeeeeeally nitpick to an extreme degree, I could say that it was a bit too short, but that’s kind of a bullshit complaint, so fuck it. Deadpool is a perfect movie. It deserves to be nominated for an Oscar next year. There, I fuckin’ said it.

Overall: No, I’m done. Get your ass out of the chair and get to a theater right fucking now!

There, I praised your shitty movie Fox. Where’s my fucking money!?!?! HEY, MURDOCH, WHERE’S MY MONEY, YOU FUCKING HACK!?!?