Say “Ralph Fiennes” out loud for me right now. If you pronounced “Ralph” with an “L”, then I know something you don’t know! … “Saoirse Ronan” is still a complete fucking mystery for me though.

So, I finally got to see Wes Anderson’s new movie, The Grand Budapest Hotel. Before beginning the review, I must confess that I’ve never actually seen a Wes Anderson film before. I knew him only as the weird, quirky guy that uses a lot of colour and makes a lot of movies with Owen Wilson, Bill Murray and Edward Norton. But hey, I’m nothing if not intrepid, so I decided to take a chance, not go to some crowd-pleaser like  Noah, Captain America: The Winter Soldier or The Lego Movie (Which may be because I hate watching animated movies in theaters, but that’s a topic for another post) and take a chance on this weirdo and his Ralph Fiennes-headed movie.

Boy am I not regretting that decision right about now. 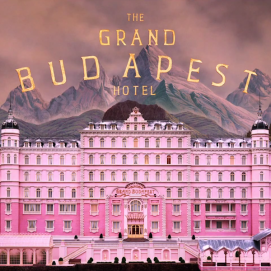 Plot: The Grand Budapest Hotel opens in the fictional European republic of Zubrowka in the year 1968, where a famous unnamed writer (Law) is vacationing at a decrepit relic of a hotel named, you guessed it, the Grand Budapest. The once decadent and celebrated hotel has fallen onto difficult times, being, as mentioned, decrepit and, as a result, business has suffered. While there, the writer meets the elderly proprietor of the hotel, a man named Zero Moustafa. Moustafa, a fan of the writer’s work, invites him to dinner where the writer inquires about how the old man came to own the hotel and why the hell he hasn’t closed the dump down.

Moustafa’s story began in 1932, when young Zero (Revolori) was hired as a lobby boy at the Grand Budapest, a lucrative, decadent hotel with a mysterious, anonymous owner where he is mentored by the hotel’s eccentric concierge, Monsieur Gustave H (Fiennes). The looming specter of war in Zubrowka does nothing to faze Gustave  an extremely devoted concierge, who goes the extra mile to make the clientele feel comfortable and ensure that everything runs smoothly. He is, however a bit of a, well, an oddball. In order to make any anxious older blonde ladies feel welcome, personally makes them feel physically and emotionally at ease… With his penis.

Sadly, one of his more frequent penis-clients, Madame D (Swinton in terrific old lady makeup) dies under mysterious circumstances. Accompanied by Zero, he arrives at Madame D’s wake, where it is revealed, surprisingly, that he has inherited an invaluable painting from Madame D, the priceless Boy with Apple. This decision does not sit well with Madame D’s family, especially her villainous son, Dmitri Desgoffe-und-Taxis (Brody), who coveted the painting and wants him dead.

As far as the story goes, I have no real complaints with the movie. I’ve always been a fan of the mystery-comedy genre since I saw the Pink Panther movies as a little kid….

And then, Hollywood discovered the reboot and everything went to shit.

…  And, in truth, it does seem to have a similar style to those movies, so yeah, maybe it provides a healthy bit of nostalgia for me, but regardless of my weirdly old-fashioned tastes, it’s humour should appeal to pretty much anybody. It’s zany enough to appeal to little kids, dry and subtle enough to appeal to older folks, and, surprisingly, dark enough to appeal to sick, twisted weirdos like me. Is this type of somewhat wide-reaching humour a staple of Wes Anderson movies?  Because if so, I need to have a marathon one of these days, this stuff is just wonderful.

One minor quibble I have is that the plot got a tiny bit muddled near the end, which left me a little bit confused, but truth be told, I couldn’t really give less of a shit. The humour, as well as the wonderful use of colour more than make up for anything my pathetic lizard brain couldn’t comprehend. There is just way too much positives to really make a serious complaint out of something that can be remedied by just paying a little bit less attention to the colour of the elevator, or whatever.

Acting: The cast in this movie is goddamn insane. All of Anderson’s usual crop of actors make an appearance in roles of varying importance, and they are all very good at their respective parts. The two leads, however are played by Wes Anderson newcomer Ralph Fiennes, who is absolutely brilliant as Monsieur Gustave, and should, so far, be an early favourite for an Oscar nod.

Although it’s easy to be considered an Oscar favourite in March when this piece of crap is the next best non-animated movie in theatres.

This is the first big role for American actor Tony Revolori however. And I gotta say, he knocks it out of the park as young Zero Moustafa. It’s a rare thing when I approve of an actor under the age of eighteen, but Revolori is funny, fun to watch, and in rare occasions, kind of sad. Irish actress Saoirse Ronan is also wonderful as Zero’s love interest, and Adrien Brody is clearly having a blast as the cartoonishly evil, yet still sinister antagonist, Dmitri.

Which is good to see, considering the career choices he’s made lately.

Conclusion: Vibrant, colourful and hilarious, Wes Anderson’s The Grand Budapest Hotel is an epitome of pure joy. If there is one movie you must see this week, go on and take a chance on Wes Anderson. Captain America isn’t going anywhere.