There are a few things that are certain in this long, painful life that we lead. Specifically, death, the failure of the Chicago Cubs, shitheads on YouTube (Comment sections or otherwise) and celebrities who enter musical careers only because they once played a musician in a movie.

But it also seems that there’s at least a few exceptions to the aforementioned afflictions. Some people seem to cheat death against all odds including, but not excluding, Christopher Lee (Awesomely) and Fred Phelps (Unfortunately). People get out of paying their taxes all the time. Of course, by people, I mean the good people at heartless companies like General Electric. If you look past the commentators, YouTube has some good stuff on it (SourceFed, Vsauce etc.). The Cubs had that one championship more than one hundred years ago.

This seems as good a time as any to declare Fred Phelps to be an asshole again.

The exception for the last category (That is the actors turned celebrities) is the subject of today’s “Musician Biography”. Ladies and Gentlemen, give it up for: 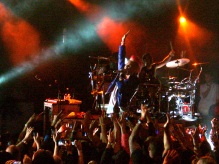 Legacy: The flourishing of Jared Leto’s musical career and the continuing public indifference to his film career. Also, making teenage girls buy into the misguided belief that the success of this band means prog’s cool again.

Teenage girls are into musicians for the quality of their music, right?

As you may or may not no, Jared Leto is an actor from Louisiana who has appeared in several moderately well-known movies, including Requiem for a Dream (In which he plays a heroin addict and dealer), Fight Club (In which he gets the shit beaten out of him by Edward Norton), American Psycho ( In which he is ax-murdered by Christian Bale) and Alexander (In which he plays Colin Farrell’s gay lover). He started 30 Seconds to Mars as a small family project with his brother, Shannon Leto. In 2001, the brothers recruited Matt Wachter to play bass and keyboards, and Solon Bixler on guitar. Bixler eventually left and was replaced by Croatian-American guitarist Tomo Milicevic.

Because the Leto family is, y’know, rich, they were able to get in the studio and start recording an album in 2001. In July, the band released their first single, “Capricorn (A Brand New Name)”. On August 27, 2002, they released their first, self-titled album, in which Jared played guitar, vocals, bass guitar and synthesizer. The album (Influenced in part by the science fiction novel, Dune) was received warmly by critics, who praised the lyrics, themes and musicianship. Personally, I though the album to be pretty fucking boring. On the plus side, Leto is a great songwriter and musician, but on the other hand, perhaps aside from “Capricorn”, the album is pretty nondescript and doesn’t grip me at all, but eh, what do I know?

Apparently, not too much, as the album zoomed to the top of Billboard’s Heatseekers Chart and hit 107 on the Billboard 200. “Capricorn” ended up peaking at No. 31 on the American Rock Charts while a post-relese single, “Edge of the Earth” hit No. 5 on the UK.

After touring for the album concluded, the band recorded and released another single, “Attack”, which critics and fans (And me!) adored, mainly because it showcased Leto’s amazing vocal talent. It isn’t often that an actor starts a musical career and actually has a passable voice, much less a good one.

The following album, A Beautiful Lie, which was recorded over four years on Leto’s various film sets, was released in August of 2005 and was praised by critics (And me!) except for AllMusic, which surprises me, and Rolling Stone, because well, duh.

When you have to present terrorists in an attractive fashion on your albums to get some attention, then your musical opinion can be taken with a grain of salt, I think.

The album, which abandoned the prog metal of their first album for emotionally charged alternative rock, reached No. 22 on the Modern Rock Charts (And No. 1 in Canada!) and was eventually certified platinum, while a post-album single, “From Yesterday”, hit No. 1 on the Modern Rock Tracks (Though, to tell you the truth, I kind of hated it).

Having achieved mainstream success, the band embarked on the “Welcome to the Universe” tour, which lasted two years and solidified their rock star statuses. During the worldwide tour, they championed environmentalism (Of course they did) , shot the first ever American rock music video in the People’s Republic of China and had Matt Wachter leave the group to spend more time with his family and, eventually join Angels & Airwaves. He was replaced by Tim Kelleher, who is still with the band, but only as a touring member.

But wait a minute. What’s missing from the picture here? Hmmm…. Oh, that’s right, the obligatory dispute with an asshole record label? How could I be so foolish?

In August 2008, Virgin Records sued the band for a whopping $30 million lawsuit, claiming that the band failed to deliver the five albums that they were obligated to deliver. However, under California law, nobody can be bound to a contract for over seven years. Virgin, realizing that they hadn’t done their research in their quest to wring every last drop of money out of their bands, dropped the lawsuit and the band re-signed with them, for some inexplicable reason.

Although Jared Leto did make a documentary about the lawsuit, so maybe it was all for the purpose of an elaborate “fuck you.”

Fun fact: at the preview of the above-mentioned documentary, someone may have tried to kill Jared Leto. Could the labels have made their way from bullying and intimidation to murder? If so, then I have some potential targets that I think everyone can agree on.

On December 8, 2009, 30 Seconds to Mars released their third studio album, This is War. This would prove to be their most successful album yet, hitting No. 18 on the Billboard 200 charts, number 4 on the Rock charts and number 2 on the Alternative charts. In addition to this, three of the singles, “Kings and Queens”, “This Is War” and “Closer to the Edge”  got in the Top 10 pf the Billboard Alternative Charts, with the first two tracks hitting 1st place.

The album received  positive reviews as well. It is my personal favourite album on the 30STM catalogue, if only for the fact that “This is War” is on this album. Anyways, the resulting supporting tour won the Guinness World Record for “Longest Concert Tour by a Rock Band”, playing a total of 309 concert shows in just over two years.

WHERE ARE THEY NOW?

Um, pretty much the same place as always. Their latest album, Love Lust, Faith and Dreams, showcases the bands full musical talent/pretentiousness, with elements of symphonic rock edging out a large amount of the hard rock edge. Still, it was both critically and commercially successful, hitting number 6 on the Billboard 200. Personally, I’d rate it as better than the self-titled album by far, but not as good as A Beautiful Lie. It’s just too damn pretentious for me to take completely seriously. Also, it has one of the ugliest album covers known to man.

As a rule, album covers should note make you think of Connect Four.