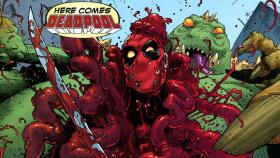 Truth, Justice, and an intense amount of gore and intestines flying about!

It’s a good thing these trailers keep coming out. How else would I get around posting original content for once in my damn life?

A mere week or so after I completed my Suicide Squad posts (Parts 1, 2 and 3 can be found here, here and here, respectively), a slightly condensed version of the Deadpool trailer from Comic-Con dropped, and, being both a comic fan and a child of the new millennium, the prospect of a Deadpool movie finally getting made and getting made right is very exciting, especially after the shitshow that was X-Men Origins: Wolverine.

Here’s the red-band trailer, because nobody cares about the stupid PG-13 version.

Like Suicide Squad, a lot of these characters are pretty obscure, just as, if not more obscure than Slipknot or El Diablo. Case in point…

I’m kicking myself for not naming my blog “Negasonic Teenage Warhead”.

Portrayed by: Brianna Hildebrand (N/A. Deadpool is her first movie)

The incredibly named Negasonic Teenage Warhead is the Z-Listiest among this cast of C and D listers, given as she only appeared in fourteen issues of Marvel Comics, and even I, who could recite the history of Katana and Rocket Raccoon if you put a gun to my head right now, had to make sure that this was an established character, and not either somebody made up for the movie, or the name of a hardcore band from the 80’s.

Well, she definitely has the 80’s hardcore look down.

NTW was a teenager (Duh) from the island of Genosha, which, to put a long story short, is an island northeast of Madagascar with a population that is just about entirely comprised of mutants. She was a student of Emma Frost (January Jones in X-Men: First Class), which suggests that she, like Frost, has telepathic abilities, although to what extent, I don’t know. Her main power is her ability for foresight, having precognitive nightmares that predicted that the entire population of Genosha was going to be killed. Apparently, the geniuses in charge of Genosha decided that they could afford to ignore the person whose whole deal is that she can tell the future. Did this decision pay off?

In the ensuing massacre of Genoshan mutants by the evil Cassandra Nova, NTW was killed. She survived as part of Emma Frost’s subconscious, and briefly came back to life when her, uh, subconscious came back to life and attacked the X-Men (I don’t fuckin’ know) before being killed again by Cyclops. She was finally resurrected by the evil Selene, who she served as a slave until Selene was killed by Warpath. Her current status is unknown.

…This is almost certainly not going to be her movie origin though, so you might as well treat her like an all new character.

I’d rather see Ronda Rousey, but this works too.

Hold on a minute, I need to satisfy my curiosity.

Scared by the sudden development of her mutant powers, Angel Dust ran away from home and joined the Chicago faction of the Morlock, which are essentially mutants that live in the sewers, in self-imposed exile from the rest of society, because blah blah blah, it’s a metaphor for racism. After defeating a Sentinel base with the rest of her Morlock pals, she returns home to her parents, who are surprisingly accepting of her situation. She was later depowered after M-Day, which is a whole other thing that I’m not going to get into now.

Even more so than Negasonic Teenage Warhead, Angel Dust’s origin story is pretty much irrelevant to the Deadpool movie, as we see that she’s actually an antagonist in the movie, and is a guard or something in the facility where Deadpool is being held. Hopefully the next character’s comic book origins will actually be consequential to the movie. And take up more than a paragraph’s worth of history.

Vanessa Carslysle was a mutant with the gift of shapeshifting who had fallen into a life of prostitution in Boston. She was saved from this shitty situation when she fell in love with a Canadian mercenary named Wade Wilson. After running off with Wilson, he ended up dumping her when he discovered that he had been afflicted with cancer. Heartbroken, Vanessa utilized her mutant talents to become a mercenary herself, infiltrating the New Mutants for her first mission and becoming a staple supporting character in X-Men spinoffs like X-Force and New Mutants when she was impersonating Domino, as well as an on-again-off again love interest for Deadpool until her death at the hands of Sabretooth in 2001 (Though she was resurrected, she just hasn’t appeared at all since then, except for a brief cameo in a recent issue).

Not bad for a character who’s basically a clone of Mystique, down to the impractical lack of clothing.

Someone really needs to tell comic book artists that female body armour is a thing that exists.

Well, she’s actually not a complete clone of Mystique. In addition to being able to perfectly mimic somebody else down to the molecular level, she can also replicate their powers. Will all this awesomeness come into play during the movie? As of right now, It doesn’t look that way, as during no part of the trailer does it mention that Vanessa is either a mutant or a mercenary. That said, Movie Vanessa is definitely Deadpool’s love interest, and her sordid origins may be more or less the same, judging from the scene that takes place from 1:47 to 1:49 in the trailer. Judging by the trailer and the fact that we haven’t seen Morena Baccarin gussied up in body paint (Drool) or motion-capture gear means that we’ll likely have to wait until the inevitable sequel for her to become all blue and shit.