Before jumping right in, I’d like to apologize for lying about doing a post yesterday. In my defense, a little barely known film called Man of Steel got in the way. You probably haven’t heard of it.

“Not going to movies on opening night and feeling crowded as all hell is soooo mainstream.”

Though, really, when was the last time you’ve heard of a sixteen year old keeping a deadline?

Anyways, let’s dive right in, shall we?

I didn’t play Super Mario 3D Land, but if I do get a Wii U, this game will be near the top of my must-buy list. I’m betting that this game won’t be nearly as good as Super Mario 64 or Super Mario Galaxies 1 and 2, but it will, in all likelihood, be a really good time.

Platforms: What does it say in the title, jackass?

The Smash Bros. franchise is what got me into video gaming. At the spry (Confession: I’m not entirely sure what spry means.) age of six, wide-eyed little me rushed downstairs on Christmas morning and excitedly tore into my presents. As luck would have it, this was also the Christmas that my parents decided to afflict technology addiction on me. The last present I opened was, to my surprise, a Nintendo GameCube. Wrapped in the bundle with the GameCube was Super Smash Bros. Melee. This was my first video game console and game that I had truly appreciated (My parents had made the mistake of giving my brother and I an NES…When I was three and he was two. Needless to say, the poor NES did not last long.). When I was eleven, I waited impatiently while Super Smash Bros. Brawl got delayed again and again and again. When I finally received my pre-ordered copy, I popped the disc into my Wii and, within five minutes, was ready to declare it the best game ever made.

Of course, that was only because I hadn’t played E.T. yet.

Anyways, I may cover more of Smash Bros. in another article.

Ever since I saw the poor fella being callously betrayed in Super Mario World, Yoshi has been my favourite Mario Bros character. I mean, come on. The poor bastard raises Mario from birth, puts up with his fucked up crying, and is the sole reason the the greasy plumber lived to beat the shit out of Bowser every other day, and Mario repays him by dumping him off a cliff.

Seriously though, how much does Baby Mario suck?

I don’t see why you’d need Yoshi’s Island in 3D though. Seems like overkill. Also, I don’t much feel like depleting my precious Smash Bros budget.

I’m pretty sure I stopped giving a shit about Sonic. It may have been when Big the Cat was introduced. Or, you know, when Sega introduced bestiality into the franchise.

Fuck, man, if knowing that Ellen Page and Willem Dafoe are in this game…

And I do mean… 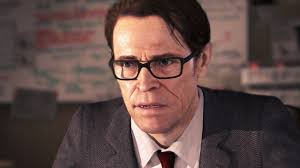 …IN the fucking game…

isn’t enough to convince you to buy it, then nothing is.

The Last of Us

I’ve never been one for horror, but from what I’ve seen and heard, The Last of Us looks fan-fucking -tastic. Story-driven action-adventure is most definitely my cup of tea, and I would get a PlayStation to try it out.

As you may or may not know, I have a morbid fascination with Disney.  And, from what I’ve heard, Kingdom Hearts is like the Avengers of Disney classics plus a bunch of anime characters I don’t give a shit about. I hope that the PS4 has backwards compatibility so I can play through the first two (main) games.

For fuck’s sake, Desmond Miles must be the most impossibly mixed-race man in the world. Arab, Italian, Aboriginal and, um, pirate? Okay then. Doesn’t distract from the fact that this series should have ended two games ago.

South Park: The Stick of Truth

Dude who cares about my two cents? It’s South Park! Of course it’ll be awesome! When have Trey Parker and Matt Stone ever failed us? Motherfucker, I don’t need to tell you to pre-order this immediately, do I?

Any ways, tomorrow (I promise) I’ll have a look at the consoles highlighted at the convention and deci, once and for all, who won E3 2013.