First off, let me apologize for going all this time without a post. I had final exams last week and was not only distracted by studying, but also by the worst case of writer’s block you’ve ever seen. This is the kind of writer’s block that leads to movie producers to exclaim “Fuck it, let’s just get somebody to blow shit up.”

Come on, don’t act like you didn’t know where this joke was going.

On an unrelated note, if Michael Bay fucks up the 2014 Teenage Mutant Ninja Turtles, let’s all agree to burn him at the stake, okay?

Anyways, I’m back and with a new feature, which I’m gonna call “Musician Biography” until I think of a better name for it. (I’m open to suggestions.) In this feature, I take a look at a musician or band’s career and examine it in depth (Or, y’know, as in depth as I get.). Since I’m a big punk rock fan, it will usually be an artist or musician from that genre, but I will make attempts to diversify. I was going to kick it off with 30 Seconds To Mars just so I wouldn’t start with a punk band, but I gave in and decided to go with what may be the most influential American punk band not named the Ramones. Ladies and gentlemen, give it up for…

The Scene: San Francisco. The Time:1978. Twenty year old Raymond Pepperell, an ex-guitarist for a rockabilly band, attends a ska-punk show at Mabuhay Gardens. Apparently favourable of the music, he promptly advertised for bandmates in a classifieds newspaper. Answering the call to arms were twenty year old Eric Reed Boucher, a UC Santa Cruz student from Colorado, twenty-nine year old Geoffrey Lyall, an ex-bandmate of Billy Squier’s, and Bruce Slesinger, who nobody seems to know shit about.

Probably figuring that their real names were not what you would expect from a dangerous punk band, they decided to adopt some kick-ass stage names. Slesinger became, um, Ted and took over on drums. Lyall became Klaus Fluoride and picked up a bass. Pepperell took the name “East Bay Ray” and took guitar. Boucher was left with the mic and took the name “Occupant.” After realizing that it wasn’t 2012 in Wall Street yet, Boucher took the name Jello Biafra, referencing the clear relation between horrifying genocides and tasty gelatin desserts.

Along with the four mainstays, the band also recruited Carlos Cadona (6025) as a second guitarist.

The band itself took the name “Dead Kennedys” in order to “Bring attention to the end of the American Dream.” Considering that Ronald Reagan’s dual-terms as president were coming up, this seems almost prophetic now. Given the provocativeness of their name, they had to go under pseudonyms, including “The DK’s”, “The Sharks”, the “Creamsicles”, and the “Pink Twinkies.” Their first show was July 19, 1978 at Mabuhay Gardens.

In March of 1979, 6025 left the group, mainly because a) he wanted to play prog-rock for some inexplicable reason and b) he and Biafra hated each other’s guts. In June, after a year of playing in and around the Bay Area, the band released their first single, titled “California Über Alles“. (Try to avoid the comments section, if at all possible.) The single was released on Alternative Tentacles, an independent record label formed by Jello and Ray.  The song, sung from the perspective of then- and current governor of California, Jerry  Brown, depicts a hippie/fascist California of the future, where uncool people are killed by the “suede denim secret police” with “organic” poison gas chambers. In retrospect, the Tea Party would have misunderstood the shit out of this song.

The song was a great early example of the menacing and tense mood of the DK’s music. Militaristic drumbeats, a gradually increasing speed, and Biafra’s sneering vocals casually commenting on how “you’d look nice as a drawstring lamp” (Which is, essentially, a lamp with a lampshade made out of human skin.). After the release of the single,  the Kennedys embarked on a successful east coast tour.

Also, around this time, Jello Biafra ran for mayor of San Francisco. Out of a field of ten, he finished fourth.

With their star rising, (you know, as much as a hardcore band’s star can rise) music industry bigwigs started to take notice. On March 25, 1980, the band was invited to perform “California Über Alles”  at the  Bay Area Music Awards along with major label acts in order to give the event “New Wave credibility.” 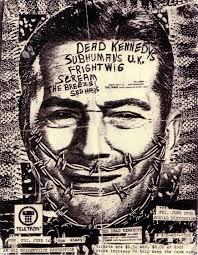 Instead of playing “California’, the Dead Kennedys , dressed like this…

‘These guys look like they would be down with major labels, right?”

…took the stage, but about 15 seconds into the song, Jello proclaimed “Hold it! We’ve gotta prove that we’re adults now. We’re not a punk rock band, we’re a new wave band.” They then performed a new song called “Pull My Strings“. A stroke of musical genius that viciously attacked the musical industry. You really have to hear it to appreciate it, but to give you an idea, this was the chorus:

“Is my cock big enough? Is my brain small enough for you to make me a star? Give me a toot. I’ll sell you my soul. Pull my strings and I’ll go far.” 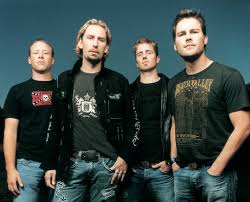 Needless to say, they were not invited back.

In May 1980, the Kennedys released a second single entitled “Holiday in Cambodia.”  Another underground masterpiece, the song was a dual attack on both Pol Pot’s regime in Cambodia and, essentially, hipsters. On September 2nd, the band released their first studio album on Alternative Tentacles, Fresh Fruit for Rotting Vegetables. This is the closest the DK’s got to a perfect record. There is not a single disposable track on the entire album, and it is widely thought to be a punk rock classic. Not only that, but it remains pretty damn relevant. Have a listen to “Kill the Poor.” Doesn’t it sound like a present-day Republican (Or present-day Democrat, for that matter) campaign promise?

In January 1981, drummer Ted decided he wanted to leave the band to pursue a career in architecture. He helped the Kennedys find and hire his replacement, a massive young black kid from St. Louis named Darren Henley, who took the name D.H. Peligro. On an unrelated note, how many other punk bands can you name that have black members? (Not named the Bad Brains, I mean.)

Around this time, in a preview of what was to come, East Bay Ray started pressuring the band to sign with Universal Music subsidiary Polydor Records. The idea was nixed by Biafra, who threatened to leave the band if that were to happen. Polydor Records grew uninterested in signing anyways after the DK’s revealed that their next single was entitled “To Drunk to Fuck.”

The election of Ronald Reagan in January of that year served inspiration for the Kennedys, as seen the In God We Trust, Inc. EP. From attacks on the religious right (“Moral Majority”), Neo-Nazis (The excellent “Nazi Punks Fuck Off.”) and the Gipper himself (“We Have a Bigger Problem Now”, which was essentially a re-tooled version of “California Über Alles”). In 1982, their second studio album, Plastic Surgery Disasters was released. While not as good as Fresh Fruit, PSD was still a very well-received effort that started straying from traditional hardcore and started experimenting with psychedelic and jazz music.

With the release of Plastic Surgery Disasters, and the subsequent touring of the States, Europe and Australia, Dead Kennedys became one of the biggest underground rock groups in the world.  The Alternative Tentacles record label flourished as well, with bands such as D.O.A., the Dicks and the Butthole Surfers signing on.

In 1985, the band released the excellent Frankenchrist album, which explored in more depth the Kennedys’ musical range. While still not as good as their debut album, Frankenchrist is a close second, with songs like “Soup is Good Food” and “Stars and Stripes of Corruption”   attacking, once again, the US government while songs like “MTV Get Off the Air” and “Jock-o-Rama” poking fun at American social dynamics.

Unfortunately, the album was also the beginning of the end for the Dead Kennedys. You see, on a poster included with the album was a painting by H.R. Giger (The guy who designed the aliens in Alien) entitled, rather descriptively, Penis Landscape. This was racy enough, but even more unfortunately for the band, this was the era where the PMRC and the religious right were trying to stamp out any form of  “harmful matter” in music. Long story short, the band survived without penalty, but Alternative Tentacles was driven to near bankruptcy. Here’s hoping Tipper and her faux-Green ex husband stay irrelevant. On the other hand, maybe something would be done about Nicki Minaj.

I, for one, suggest a targeted assassination.

After that whole debacle, the Dead Kennedys grew disillusioned not only with society, but also with the hardcore scene itself, which was attracting, among others, thugs, racists and homophobes who were only there to act tough. Frustrated, California’s most iconic hardcore band called it quits in February of 1986, though they did finish recording their fourth and final album, entitled Bedtime for Democracy. While it was subversive as ever, it kind of seemed, well, dull. With no real standout tracks, the only message that this album conveys to me is a “fuck this shit” mentality. Never would one think that Jello Biafra would display that idea, but there you go.

So, this seemed rather cut and dry, right? Band forms, becomes good, breaks up, end o’ story. There can’t be much more to it, right? 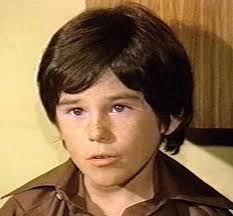 Stay tuned, dear readers, the tragedy of the Dead Kennedys is far from over.