Pop quiz: What do the following movies have in common?

If you guessed either of the following, then congratulations, you win!

Yes, it seems that during the vast majority of Oscar ceremonies (Or, at least, every Oscar ceremony that I researched until I got bored), there always seems to be one movie among the winners that should just count itself extremely lucky to be enshrined alongside true legends of cinema like No Country for Old Men, Argo and Gravity. Very rarely, however, do these movies take home a major award though (Although Meryl Streep did win Best Actress for The Iron Lady). More often than not, they win things like Best Makeup or Best Visual Effects. You know, semi-important awards, but not important enough to prevent movies like Jackass Presents: Bad Grandpa from being nominated.

A movie brought to you by the same  grown men who allowed their puppet-garbed penises to be bitten by snakes.

Which reminds me, I need to watch Bad Grandpa.

Anyway, in the last Academy Awards, the movie that joined this mediocre group of unlikely legends ended up winning two Oscars for Best Costume Design and Best Production Design, despite receiving paltry critical reviews. Did the critics blow it in their evaluation of this film, maligning it because of a brutish lack of understanding of Baz Luhrmann’s vision? I’ll let you decide, dear readers… 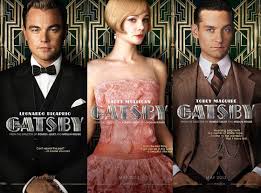 Fun fact for all you Mumford & Sons fans out there: Carey Mulligan (The adorable blonde in the pink dress) is a former pen pal and current wife of M&S lead singer Marcus Mumford.

Based on: The Great Gatsby by F. Scott Fitzgerald

Plot: The movie is told through flashback by Nick Carraway (Maguire), a Yale University alumni and World War I veteran who has admitted himself to rehab in order to deal with his alcoholism. At the suggestion of his doctor, he starts chronicling his experiences in New York, where he lived when he was pursuing a career as a stockbroker in 1922.

We are then taken back to the Roaring Twenties, when jazz was all the rage, Wall Street was booming, and toothbrush mustaches weren’t automatically associated with Adolf Hitler.

Nick moves into the fictional Long Island village of West Egg, across the bay from his cousin, Daisy (Mulligan) and her disgustingly rich, cheating white supremacist husband, Tom (Edgerton), who Nick knows from their college days. While dining with his cousin and her husband, he also meets a friend of their’s, cynical young professional golfer Jordan Baker (Debicki), whom Daisy is trying to set up with Nick.

Nick also runs into some drama when he is invited to one of the many overly extravagant parties that are thrown by his next-door neighbour, a filthy rich business man by the name of Jay Gatsby, a man rumoured to be, among other things,an assasin, a bootleggr and a German spy. Nick befriends Gatsby, who, as it turns out, knows Nick from the war and takes an interest in him, as he is madly in love with Nick’s cousin Daisy, whom he courted before the war until they fell out of touch.

To date, I have seen two Baz Luhrmann movies, and I’ve gotta hand it to the man, he’s pretty damn unique with his filmmaking technique. There doesn’t seem to be another director alive who takes quite as much joy in trying to dazzle the audience not with special effects, but in using his eye for great cinematography, music and vibrant imagery to try to make his films look as much like an Italian-style opera as possible. There are times when it works out quite well, as in the case of critically acclaimed movies like Moulin Rouge! and Strictly Ballroom (Neither of which I have seen, admittedly) and other times when it feels… Out of place, to say the least, like in Romeo & Juliet, which I did see.

Unfortunately, The Great Gatsby falls into the latter category.

The Great Gatsby is one of the few classic novels that I’ve actually read  for pleasure, and, while I did enjoy it, not once did I think that I wanted to see a film adaptation that featured as much flashing, overwhelming lights, contemporary hip-hop and R&B soundtrack, and Tobey Maguire as this one did. The Great Gatsby was written by Fitzgerald as a period piece about the extravagance and excess of the Roaring Twenties as well as a character study about Jay Gatsby and his relationships with Nick, Daisy and the other people surrounding him. Sure, a good deal of the book was centered on his flashy parties, but the glitz and glamour wasn’t at the forefront of it all, which, unfortunately, isn’t how Baz likes to do things. Throughout the first and second acts of the movie, the audience is simply bombarded with colours, flashing lights, and misplaced music, all of which don’t really serve any purpose other than to exhaust the audience.

As for the soundtrack, I kind of hated it. For all the hoopla about Jay-Z being an executive producer and working on the soundtrack, I only heard one or two songs by the man formerly known as Shawn Carter, and I wasn’t all that impressed. This is by no means a diss, because I love me some good rap music, but wouldn’t it have been better to use  soundtrack of mostly jazz music or something? You know, because it’s set in the Twenties, which were jazz’s Golden Age?

Honestly, I do get what Baz is trying to do here: create a spectacle that can dazzle the audience with it’s beautiful cinematography. I’ll be the first to admit that that kind of thing has its time and place. Hell, there’s even a few moments in this movie where Baz’s vision pays off, especially some of the gorgeous shots of the bright lights and bustling streets of New York City. Unfortunately, it gets excessive and overwhelming, and misses much more than it hits. I feel like this movie would’ve been done better in the hands of somebody like Martin Scorsese. I would’ve much rather seen a movie centered around Gatsby (Instead of shoehorning him in at the 30-minute mark) and shot in the style of Scorsese’s masterful 2003 film, The Aviator.

Speaking of Scorsese, his frequent collaborator (And my favourite actor), Leonardo DiCaprio, is the star of this film and, fortunately, does a great job as the eccentric millionaire Jay Gatsby. My favourite scenes in the movie don’t involve the ridiculous party scenes, but rather the dialogue between Gatsby and Nick and/or Daisy. The characters in this movie aren’t very well defined, but Leo takes what he’s got and manipulates the audience into feeling for Jay Gatsby, even if the rest of the movie kinda blows.

As for the rest of the actors, well, I guess they get a A for effort. Tobey Maguire (My childhood hero) isn’t bad, per se, as Nick Carraway, but he’s pretty nondescript, as his character pretty much just serves as an object that Leo can spout expository dialogue to. Carey Mulligan is fine, albeit somewhat dissapointing as Daisy Buchanan, who is apparently the 20’s equivalent of a Manic Pixie Dream Girl. Joel Edgerton is also okay as Tom Buchanan, but he doesn’t do much more than some scenery chewing as the mustache twirling villain.

Holy shit! H even has a Hitler mustache (Kind of)!

Australian newcomer Elizabeth Debicki makes her debut in this movie as Jordan Baker, and she’s, well, okay I guess, but come to think of it, her character was kind of unnecessary.  I guess she did tell Nick about Tom’s affair, but we learned that later on anyways. Leo really does carry this cast, and this movie, in fact, from badness to mere mediocrity.

Kind of like his other big 2013 movie, except at least this one had the decency  to end at a reasonable fucking time.

Conclusion: It may boast some intriguing sceness and yet another great performance from Leonardo DiCaprio, but overall, The Great Gatsby is mostly style, little actual substance.