A round-up is like a rodeo thing, right? Eh, whatever, I don’t care.

Last Friday, I took the day off of school (Because I am a goddamned adult) in order to catch an early showing of Jurassic World. I thought this would work out well for me, because a) I would see it before the theatres got a chance to fill up in the evening (When I usually see movies on opening night) and b) I would have ample time to get my review out on Sunday, when I like to have movie reviews out by.

I watched the movie, made my way home, and spent the rest of the day and Saturday working non-stop on a rough draft, in between watching soccer games and watching the Jays absolutely wreck the Red Sox (John Farrell can suck it) and eventually finished my 1000-word review. I was feeling pretty good about myself.

And then I read the review.

Then I re-read it.

Then I stared at the five pages I had written on in absolute shock at the fact that I could write something so hackneyed, boring and all-around half-assed.

Don’t get me wrong, I’m aware that I’m not exactly Peter Travers or Roger Ebert, but I’d like to think that I can at least hold somebody’s interest for the ten minutes or so that it takes to read a review. It’s been a while since I put out a review that I would classify as truly bad, and I’m not about to start now. All three of you who occasionally glance at the site on the WordPress Reader deserve much better.

So, with a heavy heart, I tossed the rough draft to the curb and fell into a deep depression… That was instantly alleviated when Russell Martin hit a home run in the eleventh inning.

Just replace “Scott” with “Farrell” and “Cartman” with “the Jays.”

I’m not going to stop using that link. Like, ever.

Anyways, I did scrap the post, but I also wanted to get my thoughts about the movie out, even if I wasn’t going to get around to a full review again. So, because we’re just about halfway through the year, I’ve decided to do quick reviews of all the movies that I’ve seen this year, but that I didn’t get around to reviewing, because I either saw them too late after their release to really warrant a review, or because I wasn’t particularly interested in seeing or reviewing them when they first came out.

And when I say these are short reviews, I do mean short. I mean a few sentences of plot summary, a paragraph or two summarising my feelings on the movie, and then some quick bullet points, followed by a half-assed rating.

Plot: A clumsy talking bear from Peru (Ben Whishaw) immigrates to London, where he is adopted by a family (Hugh Bonneville, Sally Hawkins). Shenanigans ensue.

As family comedies go, Paddington isn’t breaking any new ground whatsoever. It’s completely predictable through and through, the characters are either stock characters (Bonneville, Hawkins) or cartoons (Kidman, Capaldi, Jim Broadbent) and not a swear word was uttered throughout the entire runtime.

That said, British humour will make up for many shortcomings, and aside from predictability, this movie is completely harmless fun. 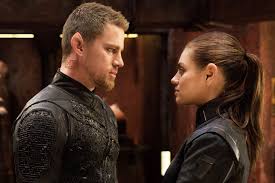 Wow, how was I ever optimistic for this?

Directed by: Lana and Andy Wachowski

And Mila Kunis falling. All. The. Fucking. Time.

The Wachowskis are the kind of filmmakers that I want to like, artistically speaking, because they’re gifted with more creativity than I could ever dream of possessing, and have a genuine love for creating art that rivals the greats. Too bad every movie they’ve made since The Matrix has royally blown. Granted, it’s debatable how involved they were in directing the excellent V for Vendetta, and I would argue that Speed Racer is a better movie than people give it credit for, but maybe it’s time to quietly put the Wachowskis in the same category as M. Night Shyamalan. They had a nice run, but don’t expect much from them anymore.

That is an actual line in the movie.

The SpongeBob Movie: Sponge Out of Water

It’s like they actively wanted people to sneak “special” brownies into the theatre.

Plot: When the fabled Krabby Patty formula is stolen by an unknown thief, SpongeBob and co. must team up to find the criminal and save Bikini Bottom, which has fallen into disrepair.

It’s hard to judge something as inherently stupid and obviously made for children as SpongeBob. I guess I could say that, as a fan of the older seasons of the show, I was kind of disappointed that they didn’t incorporate more of the edgy feel from the early days of the show. Then again, I’m obviously not the target audience anymore, so I can’t be too upset about it at all. Oh, god has it really been that long since the early days? I feel so old.

Oh, how I miss you, disgusting Squidward.

That line makes me piss my pants with laughter.

I’m not much of a horror film guy, but that’s a terrific title.

Plot: After a super bizarre sexual encounter, college girl Jay (Maika Monroe) discovers that she’s being constantly pursued by a monster that takes the form of anybody, and follows her constantly, prompting those 80’s slasher shenanigans that everybody enjoys, for some reason.

I’m very open about the fact that, I despise the vast majority of horror movies, even the ones that are critically acclaimed hold little to no appeal to me. I would rather be disturbed by a dark fantasy movie like Pan’s Labyrinth than scared shitless by Nightmare on Elm Street, only to have it leave little to no impression on me.

I was intrigued by It Follows, though, because I thought the premise was cool, and it was getting an amount of praise similar to The Babadook, which I really enjoyed. And I also thought the main character was cute. Whatever, I’m shallow.

So, what did I think? Well, it was more or less what I expected. The premise was executed mostly alright, but the slasher conventions and writing really bring the movie down as a whole.

After Grown-Ups 2, we can only go up from here.

Plot: Max Simkins (Adam Sandler) is a cobbler living on the Lower East Side of New York, and is kind of miserable until he discovers a stitching machine in his basement that, upon repairing a shoe, grants Simkins the ability to actually become that person while wearing the shoe.

While The Cobbler is definitely a step above recent Sandler efforts, it’s still downright terrible, stupid, and tone-deaf. I’m not going to dignify it by reviewing it further. The only movie that I’ve seen this year that can claim to be worse than The Cobbler is Chappie, and even then, there’s room for debate.

You know, for a movie that has no business existing…

Or “Robophilia: The Motion Picture.”

Plot: Caleb (Domhnall Gleeson) is a programmer for Bluebook, the world’s biggest Google surrogate. He wins a contest, the prize being a trip to the secluded cabin/research facility of the company’s’ founder, Nathan Bateman (Oscar Isaac), who wants him to examine his new breakthrough: A bona fide A.I. (Alicia Vikander). Shenanigans ensue.

This movie has been getting all sorts of critical praise, and it’s definitely warranted, at least mostly. The performances are all excellent, the CGI on Alicia Vikander’s character is some of the best I’ve ever seen, and the sense of dread that permeates throughout reminds me very much of a Kubrick movie, actually. Down to the pace that can get a bit too slow sometimes, unfortunately. Is it a legendary movie? Nah, I’d say it’s merely terrific.

Plot: It’s been twenty years since the events of Jurassic Park, and, despite all evidence that would suggest that it’s a terrible, terrible idea, John Hammond’s vision has been fulfilled. The park has now opened, and- ah, fuck it, it’s late, I have a diploma exam tomorrow, and you’ve probably seen a trailer by now.

While I enjoyed Jurassic World, I realize that it’s not a great movie, or even a particularly good one, but it’s a fun movie, which, honestly, is more than I was expecting. The characters are shit and the story is predictable, but it’s worth it for Chris Pratt, the action and the dinosaurs.