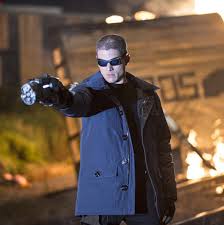 Captain Cold: Almost badass enough to make you forget that his real name is Leonard Snart. Or that he goes by “Captain Cold.”

Evidently, CW took the special effects money out of the costume budget.

I’ve never been that big of a Flash fan, to be completely honest. It’s not that I don’t like him, it’s just that he’s never been any more to me than the funny guy from the Justice League cartoon. I guess I’ve always liked him in the sense that he was a member of the Justice League, and it was cool to see him fight along some of my favourite heroes like Batman and Wonder Woman, but even today, I wouldn’t go out of my way to buy a Flash solo comic.

And yet, I read Aquaman. Funny how that works.

But hey, it only takes one good interpretation of the character for me to really embrace him or her, even if previous interpretations haven’t grabbed me. That’s why I was looking forward to this new Flash show. Knowing that CW, the channel behind Arrow, was developing it gave me hope that it would turn me on to Barry Allen like Arrow did for Green Arrow.

And boy did it not disappoint.

Let’s just jump right in. Barry Allen (Grant Gustin) is a twenty-something forensics analyst working for the Central City Police Department under his boss and adopted father, Joe West (Jesse L. Martin), who took him under his wing after his father was incarcerated  for the murder of his mother, despite Barry’s insistence that he is innocent, and that a “man inside a ball of lightning” killed his mom. Joe’s daughter, Iris (Candice Patton), is Barry’s best friend, although he has feelings for her that she is too shy to admit. However, when a particle accelerator at S.T.A.R. Labs explodes and creates a lightning storm, Barry is struck by one of the bolts of lightning and goes into a coma for nine months.

Upon waking up, he discovers that he can now move at superhuman (Sorry, metahuman) speeds, because fuck science. The scientists who looked after him are ex-S.T.A.R. Labs employees Dr. Caitlin Snow (Danielle Panabaker) and Cisco Ramon (Carlos Valdes), as well as A-list scientist Dr. Harrison Wells (Tom Cavanaugh), who was a respected scientist until the particle accelerator explosion, which left him seemingly crippled and his reputation in tatters. This trio help him develop his power and pursue the other, less friendly metahumans that the particle accelerator explosion created, like Clyde Mardon (Chad Rook) and Danton Black (Michael Christopher Smith).

Before I truly get into what I loved the show, let’s get through the two things that I hated about the show. And that was one line in each episode. Those would be the line during Green Arrow’s cameo in the first episode (“I think that lightning struck you for a reason.”) And Barry(?)’s line in the second episode (“We were all struck by lightning that day.”)

Once you get past the occasional cheesiness of the dialogue, you get a pretty great show. The action pushes aside the grittiness of Arrow for pure comic book action, which I would expect from a movie about a guy who dresses in all red and runs at superhuman (Metahuman, dammit!!!) speeds. Actually, it kind of reminded me of the good parts of the latest Spider-Man movie. The action is great for a TV show (Not quite blockbuster level, but would you really expect it from a CW show?), the atmosphere is great, a lot more lighthearted and comedic than Arrow, but it also excels in its dramatic moments, mostly thanks to the spirited performance from Jesse L. Martin, who plays Iris’s dad and Barry’s adopted dad, who is reluctant to allow Barry to go after  murderous super-criminals. Understandably so too. It’s hard to run at all when you have a million clones punching you in the head.

Grant Gustin, who you may remember from Glee, if you happened to watch that show (In which case, you saw something in it that I sure didn’t), and so far, he’s pretty great! Stephen Amell may be great as Green Arrow now, but it took him a few episodes for him to really settle into a groove. Grant Gustin has settled into that groove pretty much right off the bat,  reminding me, again, a lot of Amazing Spider-Man 2, regarding Andrew Garfield’s portrayal of Peter Parker. You know, minus the bodacious hair.

Anyway, doubling back to the atmosphere of the movie, I think that maybe the most prominent way that it blows Gotham out of the water is in tone and/or atmosphere. As I have mentioned in my reviews of the aforementioned sho Gotham hasn’t really shown what it wants to be quite yet. Is it a gritty crime/cop drama? I mean, I guess, but it throws in way too much camp and corniness for me to really take it all that seriously. The Flash,  feels like a Marvel Cinematic Universe movie. It’s lighthearted, yet dramatic at times, and really delivers on showing a badass superhero doing badass superhero things, instead of bouncing around to a bunch of villains that you’re not that interested in. Especially in this case, since the Flash’s rogues gallery isn’t quite as impressive as Batman’s or Spider-Man’s. Sure, we do have Reverse Flash and Gorilla Grodd to look forward to, but I think it’s nice for  them to focus on the minnows like Multiplex, or whatever while we have the chance to get into Flash and his friends, who, by the way, are pretty great. Especially Tom Cavanagh as Harrison Wells. I can’t stop pondering what this guy might be all about. I thought for a while that he might be Reverse Flash, but that’s probably not the case. And, for the life of me, I can’t recall a character of that name from the comics (Admittedly, I don’t read Flash comics), but DAMN, is it ever gnawing at me.

If anybody spoils it for me, I will grow violent.