Personally, I just really wanna see more of this guy. What a boss.

Let’s face it folks: We live in an age of film where the only two superhero franchises that are really causing widespread debate are Marvel Studio’s Marvel Cinematic Universe, for all the right reasons, and Warner Bros. ‘ DC Cinematic Universe for, let’s say, less commendable reasons.

Often lost in the discussion, however, is the X-Men film series from 20th Century Fox, especially after it faded from the public’s collective memory after the massive turd that was The Last Stand and the final nail in the coffin that was X-Men Origins: Wolverine. The series has been reestablishing itself, though, with a great origin story in X-Men: First Class and the likeable action movie that was The Wolverine. In 2013, a massive publicity campaign was launched for the next movie in the series, the $225 million dollar budgeted X-Men: Days of Future Past, which incorporates the original actors from the original trilogy and the newbies from First Class. How did it work out? Well, at the very least, it ensured that Shawn Ashmore and Halle Berry remained employed for a bit.

X-Men: Days of Future Past

Based on: Days of Future Past by Chris Claremont and Josh Byrne

Plot: The year: 2023. In this dystopian future, the mutants have been all but wiped out by murderous robots known as Sentinels, who were created in 1973 by a military scientist named Bolivar Trask (Peter Dinklage), whose Sentinel program was largely criticized by the American government until his assassination by rogue mutant insurgent Mystique (Jennifer Lawrence), which convinced the people of the world to adopt it. After Mystique’s capture, her DNA was replicated for use by the Sentinels, who gained Mystique’s shape-shifting powers, making them into essentially the perfect mutant-hunting killers. After years of resistance , the only mutants left include Charles Xavier (Patrick Stewart), Magneto (Ian McKellen), Wolverine (Hugh Jackman) and Kitty Pryde (Ellen Page), who has the power to send another person’s consciousness back in time to deliver warnings.

Realizing that it’s not long before the Sentinels find their hideout in China and extinguish the mutants once and for all, he decides to send Wolverine back to 1973 in order to stop the assassination of Bolivar Trask from ever happening. In order to do so, Wolverine must team up with the younger version of the deceased Beast (Nicholas Hoult), the younger version of Magneto (Michael Fassbender) who has been incarcerated in the Pentagon as the suspected murder of President Kennedy, and the younger version of Charles Xavier, who, now jaded and cynical,  has shut down his X-Men and regained the use of his legs through the use of a serum, at the expense of his telekinetic powers.

I’ve gone on and on about how recent superhero movies have seemed to commit the same error of making themselves much more convoluted then they really need to be. Both of the superhero movies released this year prior to Days of Future Past (Captain America: The Winter Soldier and The Amazing Spider-Man 2) , while both at least enjoyable, suffered from this problem, although one of them definitely handled this problem a bit better than the other.

Can you guess which one?

And you’d assume that a movie like this one, involving time travel, of all things, would be no different. However you would be wrong. Stop being so presumptuous.

At no point did the film ever lose me through convoluted dialogue or sloppy editing. Nor was it full of elaborate, pretentious dialogue that requires constant hand-holding (Cough-cough. House of Cards). When you’re making a movie that features Wolverine beating the shit out of a bunch of dickheads, you don’t need to mix in a bunch of convoluted crap in to make it feel like the Dark Knight. This movie holds off on that, which is greatly appreciated. All you need to know about the rules of time travel in this universe is neatly explained right from the get-go.

The movie also maintains a crisp pace throughout its’ relatively short run-time of 130 minutes (Ten minutes shorter than the new Spider-man). I never got bored, or felt my mind wander as boring dialogue took over. The movie finds a nice balance between witty dialogue, dramatic exposition and kick-ass action scenes. Sure, it had the minimal amounts of superhero cheese, but hey, you’re not watching Dark Knight. A little bit of cheese every now and then isn’t going to kill you.

Well, not right away, anyways.

Speaking of the dialogue, the movie hits the perfect balance between dark and funny, with most of the humor being provided by Hugh Jackman (Once again excellent as everyone’s favourite Canadian rage-monster), who provides surprisingly well-done quips and banter. and Evan Peters, who easily steals the show as everyone’s favourite new  X-Man, Quicksilver. Peters, otherwise known for his roles in American Horror Story  and Kick-Ass (Before he wisely jumped the ship of the latter franchise) brings his knack for comic timing to the table, which works all too well with the character of Peter Maximoff, who ends up having what could possibly be one o the best scenes in the entire movie.

My one problem with the character of Quickilver is the way that he is left behind by Wolverine and his berry band o’ mutants once they’re done using him. Couldn’t they have used somebody who can move at light-speed? I feel like that would’ve been extremely useful.

As for the rest of the giant cast, there isn’t really a weak link among the bunch. Jackman and Peters are great before, as mentioned, and Booboo Stewart, Shawn Ashmore, Halle Berry, Ellen Page, Fan Bingbing and Omar Sy and company, while they may not have all that much lines, do what is required of them, which is, look cool in action scenes, and stand around stoically.  Patrick Stewart an Ian McKellen (Old Xavier and old Magneto) are great in their limited scenes in this movie, and Peter Dinklage does good work as Bolivr Trask even if I was a bit shaken by him using his natural American accent instead of the English one he uses in Game of Thrones.

The best performances in the movie, however, clearly belong to the characters returning from First Class. James McAvoy is downright fantastic as the cynical younger version of Charles Xavier, as is Michael Fassbender as the radical mutant idealist known as Magneto. The scenes between the two can be downright heartbreaking, as the two old friends continuously butt heads over their extreme ideological differences, but remain painfully aware of the bond they share as former brothers in arms.

Nicholas Hoult (Beast) is good as well, but his real-life girlfriend, Jennifer Lawrence is pretty damn great. Nobody’s gonna scream “Oscar” this time around, but she did a fine job considering that a) I didn’t find her too be that good in First Class and b) Her character, Mystique, is disappointingly one-note this time around, and basically serves as a plot device to move the story forward. 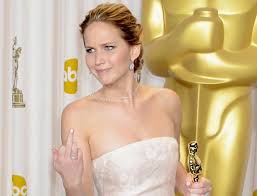 And hey, when it comes to one-note characters, you could do a lot worse than casting the most bankable movie star on planet Earth right now.

Overall: Side-stepping the many dangers that come with making a large-scale superhero movie like this, Days of Future Past is an action-packed, dark, and surprisingly funny film, and is comparable to The Avengers when it comes to sheer enjoyment level. It’s not exactly Dark Knight (The best superhero movie ever), and The Avengers is still superior in my mind, but hey, when Wolverine is tearing a bunch of punk-ass motherfuckers to shreds, who needs that “Why so serious” bullshit?

And, for what it’s worth,  the Sentinels now top my list of movie robots to be fucking terrified of.