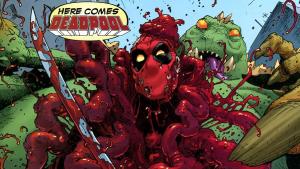 The tragic, yet oddly hilarious leaked ending of The Good Dinosaur.

Holy hell, it’s been awhile since I last did one of these. Sorry for the lack of content. It’s really been a full week.

For Part 1, in which I talk about such Marvel Comics staples as Negasonic Teenage Warhead, Angel Dust and Copycat, make your way over here. For my Suicide Squad series, click over here for Part 1.

All right, let’s do this shit.

Little is known about the man only known as Francis, or by his codename of Ajax. All we know is that his first name is Francis, he’s Canadian, and he is an alumni of the Weapon X program, the same jolly group of god-playing psychopaths who grafted the aluminium to Wolverine’s skeleton and who gave Deadpool his good looks and charming disposition.

As far as power sets go, the genetically altered Ajax was nothing particularly special, but was still pretty fuckin’ hardass. Aside from the usual tropes of having superhuman speed, agility and combat intuition (???), he was also one hundred percent incapable of feeling pain on account of having his nerves removed, which is scientific reasoning that would immediately drive most doctors to the bottle.

Unlike the other inmates at the Canadian Weapon X facility, who resented their situation, the sadistic Ajax fully embraced the situation, becoming the enforcer for Dr. Killebrew, the Mengele-esque geneticist who pretty much single-handedly created Deadpool. When a patient named Wade Wilson stepped out of line once too often, Ajax ripped out his heart, not knowing that Wilson possessed a healing factor that allowed him to immediately grow another one.

This being a goddamned comic book, Ajax didn’t stay dead (Sorry, “seemingly” dead) for long, as he started murdering other Weapon X alumni in order to get back at Deadpool. The two went at it for a while, with Ajax even seemingly killing Deadpool at one point (Again, emphasis on “seemingly”). Finally, the Merc With a Mouth ended Ajax’s miserable existence by short-circuiting his armour and breaking his neck.

Ajax seems to be the main antagonist in the film, although there are some differences from the comics. For example he’s English and not Canadian, being played by Ed Skrein, who you may remember as the character that fangirls wouldn’t stop complaining about after he was recast on Game of Thrones.

I like the newer guy a lot better, personally.

Also, he seems to have absorbed the role of Dr. Killebrew as well, with Ajax now seemingly being more of a scientist, at least in the beginning, before we see him in the trailer, sword fighting Deadpool. The role of enforcer at what I assume is Weapon X in the movie appears to have been taken over by the aforementioned Angel Dust. Odd, considering that Angel Dust has fuckall to do with Deadpool while Dr. Killebrew is an incredibly important character in the comics. I dunno. I could maybe be more speculative about this, but that would involve actually giving a shit about Angel Dust, and I just can’t bring myself to do that.

A British Intelligence agent who had been blind for most of her life and who may or may not have had an affair with Captain America at one point, Althea was on assignment in Zaire (The present-day Democratic Republic, for those of you not well versed in Central African geography) when she was targeted for assassination by a hired gun named Wade Wilson. Taking pity on the old woman, Wilson killed everybody but her, allowing her to escape. Years later, after he had fully transformed into the madman known as Deadpool, he ran into her again. Overjoyed to meet her, he kidnapped her and held her prisoner in his apartment for several years.

A bizarre relationship soon blossomed between the two. As one might expect from a total lunatic, Deadpool would often treat Al incredibly poorly, insulting her, mocking her blindness, forcing her to cook and clean for him, killing anybody who tried to rescue her and, on occasion, locking her in “The Box”, a small room filled with pointy things. Likewise, tough-as-nails Al gave as good as she got in the insult department, and took great pleasure in pranking him back.

On the other hand, Deadpool and Bind Al actually became really good friends during their time together, as Al became Deadpool’s closest confidant, and a sort of mother figure helping Deadpool redeem himself for his morally questionable past.

Beauty and the Beast can suck it.

All good partnerships come to an end, though (Ask Jason Todd). Being an unstable schizophrenic, Deadpool was bound to go through a low point, and he hit all the low points at once. He had broken up with his girlfriend, Siryn, slept with a supervillainess in a moment of weakness (Although it would take one hell of a moment of weakness for me to sleep with someone named “Typhoid Mary”) and was dealing with a new nemesis named T-Ray. One day, Wade came home to find that his friend and informant Weasel (Who we’ll get to later) was visiting Blind Al without his permission, which, despite being something that a rational person wouldn’t give the slightest shit about, is strictly verboten in the Wilson household. Enraged, Deadpool stuffs Blind Al back in the Box, which, it’s important to note, he hadn’t used for several years prior to this incident.

After this dust-up, Blind Al rightfully treated Deadpool coolly, and it dawned on Deadpool how much of a tremendous dickhead he had been. Wade decided to let Al go, but Al refused to leave of her own volition, so Deadpool used his teleporter to send her away, realizing that he didn’t want to keep her prisoner  anymore.

Fuck off, I’m not crying! A bug just flew in my eye…

Deadpool is still in contact with Blind Al, but she hasn’t appeared in much more than a cameo since the late 90’s. As for the movie’s version of Blind Al, we know that she’s living with Deadpool, likely as his hostage, but we don’t know if her backstory is the same. Also, instead of being a White British woman like in the comics, she’s a Black American, and if you give a shit about that… Well…. You shouldn’t.

I wish my mom was this cool.