There is NO REASON for “Genesis” to be spelt like that!!! It’s fucking bullshit!!!

Hey, if James Cameron approved it, it must be good, right?

Sigh….Let’s just get through this.

Plot: A retcon of sorts of the original series, Genisys (Ugh) kicks off right at the beginning of the Terminator series, with Kyle Reese (Jai Courtney) getting sent back in time to 1987 by John Connor (Jason Clarke) in order to save the human race by protecting John’s mother, Sarah (Emilia Clarke) from a Terminator (Poorly CGI’d Arnold Schwarzenegger). Once he gets back to the era when Los Lobos ruled the earth though, he learns that things have gone completely nutty. Sarah has been hunted by a goddamn T-1000 (Lee Byung-hun) for fourteen years, and has been protected by her own pet Terminator (Actual, live-action Schwarzenegger). What twists and turns await Kyle and Sarah in this bizarre reality?

Well, I won’t tell you, but I will tell you this: They certainly would’ve been a lot more impactful if I hadn’t had the big twist drilled violently into my head by the fucking trailers. God, the marketing team really dropped the ball.

In my opinion, the Terminator franchise should’ve ended with the second one (Unpopular opinion, I know). The Terminator is still an amazing movie, and Judgement Day is legitimately one of my favourite movies of all time. Rise of the Machines and Salvation, on the other hand, make no sense storywise (Skynet dies in T2, why are there still fucking Terminators???) and, quality-wise, the third and fourth movies left so little impact on me that I’m not sure how bad they actually are, which, I suppose, is kind of worse than just being a bad film.

Genisys, at least, is better and, yes, more memorable than T3 or TS. Does that make it a good movie, though?

Getting right into the review, the one constant throughout this franchise, besides the constant need to manufacture some new disaster. illogical or not, in order to pump out a sequel, is the Governator (What a stupid nickname) himself, Arnold Schwarzenegger.

Or whoever the hell this is supposed to be.

As much as people (Including myself) enjoy ragging on his limited acting ability (Though I’ve heard he’s good in Maggie, I dunno) I truly believe that his performances as the Terminator are legitimately great. It would be so easy to just be a stereotypical robot, but Arnie is downright terrifying in the first movie, and even seamlessly added comedic elements to his performance in Judgment Day, to terrific results.

Thankfully, despite it being twenty-one freaking years since his last genuinely good movie…

… Arnold brings it to Genisys. He’s maybe not as intimidating as he used to be, considering he’s pushing seventy and is essentially playing Sarah Connor’s adoptive dad, but he still brings it in the action scenes (….Mostly), has some good comedic lines (Even if most of the comedy falls flat, what with the constant attempted shoehorning of repeat gags) and holds up his end of the bargain in terms of chemistry with Courtney and Clarke… Even if the latter two don’t hold up their end of the bargain. 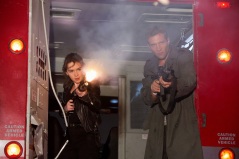 Oh… We’ll get to you two later.

But, with that out of the way, I just like giving credit where credit is due. While better than the third and fourth movies… Terminator Genisys is really bad. Not unwatchable, but… Yeah, still unmistakably bad.

The first warning that this was not going to be good was the fact that it was rated PG-13. I’m not saying that a Terminator movie has to be rated R to be good, but… It sure helps, doesn’t it? Terminator has always worked best as a scary, gritty sci-fi thriller and it’s hard to deliver on those fronts when you have a quota of blood and f-bombs that you can’t surpass. One would think they would’ve learned that with the last two movies, but on would be wrong.

And what’s with people’s asses getting blocked by shadow? Will kid’s retinas burn off if they glimpse CGI Schwarzenegger’s heavily muscled rear, or something?

This is all a poorly-veiled way of saying that I wanted Emilia Clarke nudity, by the way.

So what if I’m shallow? We’ve established that. Sue me.

Genysis also falls into the trap of shoving in a bunch of callbacks to earlier films. Throughout the runtime, especially the first half, there are moments that are tailor-made to look exactly like scenes from the first two movies and, well, I guess it makes sense story-wise, and it’s not like callbacks are the worst thing ever, but these scenes are literally the EXACTLY the same. I don’t care if you’re ripping off Citizen Kane scene for scene, you CANNOT be that lazy. Even if you do make it similar, you can still do something new or creative with the locales and the dialogue (I think the only classic Terminator line that wasn’t rehashed is “Hasta la vista, baby”). Otherwise, you’re just being unimaginative, and fuck you for that.

Even the aspects of the film that should’ve improved from the last movies (The action and visual effects, specifically) show no noticeable improvement from T2, even. The action is completely forgettable, and seemingly built around Arnie’s inevitable semi-witty line, while the visual effects don’t look like they’ve come a long way from Judgment Day and sure, T2‘s special effects are terrific even today (Unlike the Arnie-Matronic in the first movie) but that doesn’t mean that we can’t improve on it, right? Isn’t that the whole point of a sequel (Or whatever the fuck this movie is supposed to be)? To build on the positives of the original?

Oh. Shit. Forgot who I was talking about for a second.

Since I’ve gone on enough about everything else, it’s time to get to bitching about the things that piss me off the most about the movie, the wasted characters of Kyle Reese and Sarah Connor. Sarah had a terrific arc in the first two movies, transforming from an understandably frightened sadsack into an intense, asskicking badass. In Genysis, she starts off as a badass and… Goes nowhere from there. The only other layer to her character that we get is that she’s unhappy with the fact that her life seems predestined, and wants to do whatever she wants. Wow, we’ve never seen THAT character archetype before!

Oh hi, most every Disney Princess ever!!!

And as great an actress as Emilia Clarke is, she really isn’t very good as Sarah Connor. It’s not like she isn’t trying, because she obviously is, it’s just not clicking. At least Sarah likes the Ramones. That’s gotta count for something, right?

For being a main character of the first movie, Kyle Reese is a surprisingly underappreciated character in the franchise. In terms of the popularity, he probably ranks under the T-800, T-1000, Sarah Connor, pre-complete and utter insanity Edward Furlong, and that punk stereotype that the T-800 murders at the beginning of the first movie.

When I heard that Bill Paxton was a punk, I translated that as Eric Bana in my mind. Weird, I know.

So, does Jai Courtney bring Kyle Reese back to the desired level of stardom? Your hint is at 2:40-2:45 in the video below. Also, spoilers for Se7en.

Kyle Reese is so fucking annoying in Genisys. Whenever he opens his mouth, it’s only to bitch and complain at Clarke and Schwarzenegger, yell frantically that Schwarzenegger can’t be trusted when that’s obviously not the case, and hit on Clarke. What a waste.

Speaking of waste, Clarke isn’t the only great, miscast or poorly utilized actor in Genisys. Jason Clarke is perfectly unspectacular as John Connor, Matt Smith appears for two seconds, Lee Byung-hun has nowhere near enough screen time and J.K. Simmons is completely wasted on a character that contributes nothing. What a spectacular comedown from Whiplash.

Fletcher is gonna be pissed.

Overall: It doesn’t usually bode well when Arnold Schwarzenegger gives the most emotional performance in your movie.

Still a better actor than governor, though.