If I have to hear one more bullshit fan theory about Jar-Jar Binks, I’m going to go on a murder spree.

Honestly, I actually had stuff I wanted to post before reviewing Star Wars. I had a WTF for X-Men: Apocalypse on the docket. I had a review of Spotlight in development. Hell, I may have gotten around to finishing the last two entries in that DeathMatch that I’ve procrastinated on for around a year now. But once The Force Awakens took over the world, there was no way I was getting anything done before seeing the most anticipated movie on Planet Earth (I’m not exactly the outlier in this case. It was my most anticipated movie of 2015).

Before getting into the review, I should clarify that this is meant to be a SPOILER-FREE space. If anybody in the comments spoils the movie for those who have yet to see the movie, no matter if they meant any harm or not, their comment is getting removed, no exception. If you feel like spoiling the movie anyways, because you take pleasure in that sort of thing, then I feel the need to point out that you are literally festering human garbage. I shouldn’t have to do this, because I have a fairly limited reader  base (and those who usually comment are pretty awesome), but there you go. On with the review.

Plot: Taking place thirty-ish years after the events of Return of the Jedi, peace has still not been restored in the galaxy despite the Rebel Alliance’s decisive victory at the Battle of Endor. While a New Republic has been formed, a new evil named the First Order has also emerged from the ashes of the Galactic Empire.

Caught up in this battle between the Light Side of the Force and the Dark Side are a scavenger name Rey (Daisy Ridley), a First Order stormtrooper named Finn (John Boyega) and an X-wing fighter pilot named Poe Dameron (Oscar Isaac). Force Shenanigans ensue.

It’s been ten years since the last Star Wars movie, and thirty-two years since the last Star Wars movie that didn’t make me want to take a swan dive into a swimming pool full of razor blades. Until 2012, LucasFilm appeared content to leave the movies behind, and let the series be continued and expanded upon via novels, cartoons, videogames, comic books, and the best thing known to mankind:

You love it. Don’t even try to pretend that you don’t.

When Disney bought the franchise in 2012 and announced plans for a new trilogy, I wasn’t particularly happy about it, mainly because the last three attempts at Star Wars movies were the catalysts for my assorted drug habits.

You try to get through these fucking movies without an opiate addiction.

However, as we got nearer and nearer to December 18, 2015, my optimism grew ever so much, resulting in expectations that were just begging to leave me underwhelmed. Thankfully, unlike the prequels, The Force Awakens is absolutely the movie that Star Wars fans were expecting thirty years ago, both quality-wise and sheer enjoyment-wise. In other words, I fucking loved it.

With that said, I should warn anybody excited for the movie that if they’re going in expecting a perfect movie, they’re going to be disappointed. While TFA absolutely deserves to call itself a great movie (in fact, I’d say it’s my third favourite Star Wars  film, behind Empire and just barely behind the original), it is also like those movies in the sense that it’s a great movie with its fair share of flaws.

For one, it REALLY wants to remind you that you’re watching a Star Wars movie. There’s frequent callbacks to the original movies (None to the prequels, thank Christ) a lot of familiar characters pop up for various reasons (Some justified, some… Eh, maybe not so much) and some lines are copied word for word, more for giving the audience the feelz and not so much for, uh, anything else. Which isn’t to say that it’s that big of a deal most of the time. If you were to head into a movie made under these circumstances and not expect some fanservice, that’s on you. However, there’s a difference between having neat little throwbacks to the originals, and metaphorically beating the shit out of the audience with reminders that this is a Star Wars movie, and golly gee isn’t Star Wars just the greatest, most wonderful thing ever? 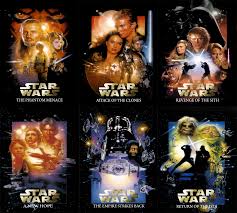 To be fair, the instances of nostalgic overkill are handled much better than they are in the prequels, and the movie takes care not to wallow in past glories: There’s more than enough new shit to justify some callbacks, but that doesn’t mean they didn’t start taking me out of the movie a bit.

While this didn’t bother me quite as much as it maybe should have, I should also probably note that there are plenty of plot points that seem to be ripped directly from the original Star Wars (If you call it A New Hope, I will find you and I will burn your life to the ground). TFA does enough stuff differently to make most of the similarities forgivable, but I’ll admit to having checked out of some of the events in the third act, because they were just so damn similar.

Just kidding, George. I can’t stay mad at you.

Even if the plot is a bit derivative though, I must say I don’t personally find it all that detrimental to my enjoyment of the movie. Sure, TFA ripped some elements from the original movie, but the original is very much just a interpretation of the classic Hero’s Journey trope, so it’s not like it was a wholly original idea for a plot in the first place, and it’s a masterpiece (albeit, a minorly flawed one).

Now that all that bullshit negativity, I get to do what I do best: Gush incoherently about all the shit I liked about The Force Awakens. And damn, if there isn’t a lot to gush about.

One of my main worries going in was that the new movie was going to focus way too much on the original 3, Mark Hamill (Luke Skywalker), Harrison Ford (Han Solo) and Carrie Fisher (Leia Organa). While they do appear in the movie (To… Varying degrees) and all give wonderful performances in the screen time they’re afforded, it’s clear that they’re passing the torch to a new generation comprised of Rey, Finn and Poe Dameron. And boy am I happy that the torch has been passed, because these three instantly became some of my favourite characters that the saga has produced.

Of the three, Rey is probably my favourite, with, and I’m not afraid to call this right now, Future Superstar Daisy Ridley giving a powerful performance as a protagonist with humble origins and more to her than meets the eye. Ditto Finn, played by John Boyega, who exudes energy, displays terrific comic timing,  and is clearly absolutely enthused to be in a Star Wars movie. I don’t mean in a bad way, like “Oh, he was just happy to be here”. He is a fan who happened to win an important part in a movie that means a lot to him, and knocks it out of the part. There are few narratives more noble than that.

Also, watch Attack the Block when you get the chance.

I feel like we didn’t get enough of Oscar Isaac, who embodies charisma as Poe Dameron, but I expect him to gain a little bit more of the spotlight in later installments.

(Oh, and if you happen have a problem with the main protagonists of this movie being a woman, a black man and a hispanic man, then I cordially invite you to find a steel rod and just go to town on yourself.)

Adam Driver as Kylo Ren (The inescapable Vader lookalike whose mask is plastered on all the merchandising) could have easily been a boring Darth Vader clone, but without revealing too much there’s also more to him than that, and I’m very interested to see where his arc goes in the future.

I don’t think you need me to tell you that BB-8 is the greatest thing ever made.

The main strength that TFA displays is the world that it creates. The prequels were fucking dead, atmosphere wise, because nobody had any personality, and all the aliens and settings were absolutely smothered by distracting  CGI bullshit. In TFA, practical effects are used much more frequently, and I thank the Force for that, because it just looks so much better when the alien that you’re looking at actually looks real instead of like a background character from Shrek. You can really buy into the illusion that this is its own world, with so many interesting things to discover, and what CGI is used looks great (I’m sure it won’t come as a surprise that Andy Serkis plays a motion-capture character and does really great). Even stormtroopers, who had a tiny bit of personality in the original trilogy (and then the prequels happened, but…. Well, you know) become a lot more interesting to watch, even if their blaster-aiming skills remain fairly atrocious.

I was never a fan of the lightsaber battles in the prequels, because they looked more like choreographed dance moves than actual life-threatening battles for control of the galaxy. TFA fixes that too, with raw, brutal fighting that resemble the raw power of the fight between Luke and Darth Vader in Return of the Jedi than the stupidity that was literally any one of the fights in the prequels. Also, they sound fucking great when they’re used. That was unexpectedly awesome.

Overall: Yes, it can be quite derivative and fanservice-y. Overall though, thanks to great performances, action, and a whole lot of heart,  The Force Awakens makes good on the filthy masses’ expectations, and is absolutely worthy of calling itself not only a great Star Wars movie, but a great movie in general.

With all my bitching about the prequels out of the way, I should point out that anybody who says that “George Lucas ruined their childhood” is either taking this shit way too seriously, or never had a childhood to begin with.