It’s been fairly hard to muster up the energy or desire to write in the past week or so, what with the world still reeling from the Paris attacks (*Cough* While ignoring bombing in Beirut *Cough*) and Western racism rearing its ugly head once again. It seems like every visit to the internet ends in depression and the need for a stiff drink. And that’s just before witnessing the nightmare that is every comment section right now.

Anyway, it’s time to get back to the real issues of the day: talking about the bone-headedly stupid adventures of gods in spandex. Part 1 can be found here.

(Note: While spoilers from the comics will be included, there’s a pretty damn good chance that they change things in the show.)

Portrayed by: David Tennant (Doctor Who, Harry Potter & the Goblet of Fire)

A Croatian spy working for the Soviet Union, Zebediah Killgrave (Because as we all know, it’s pretty standard practice for Eastern Europeans to share similar names with Donald Trump’s voter base) was partaking in a mission in the States that went South and resulted in him getting doused with a canister of nerve gas. Rather than the horrifying brain-death that anybody that isn’t a character in a silly, silly medium would suffer, Killgrave’s  skin was tinted a shade of deep purple and he was caught outright by the cops. 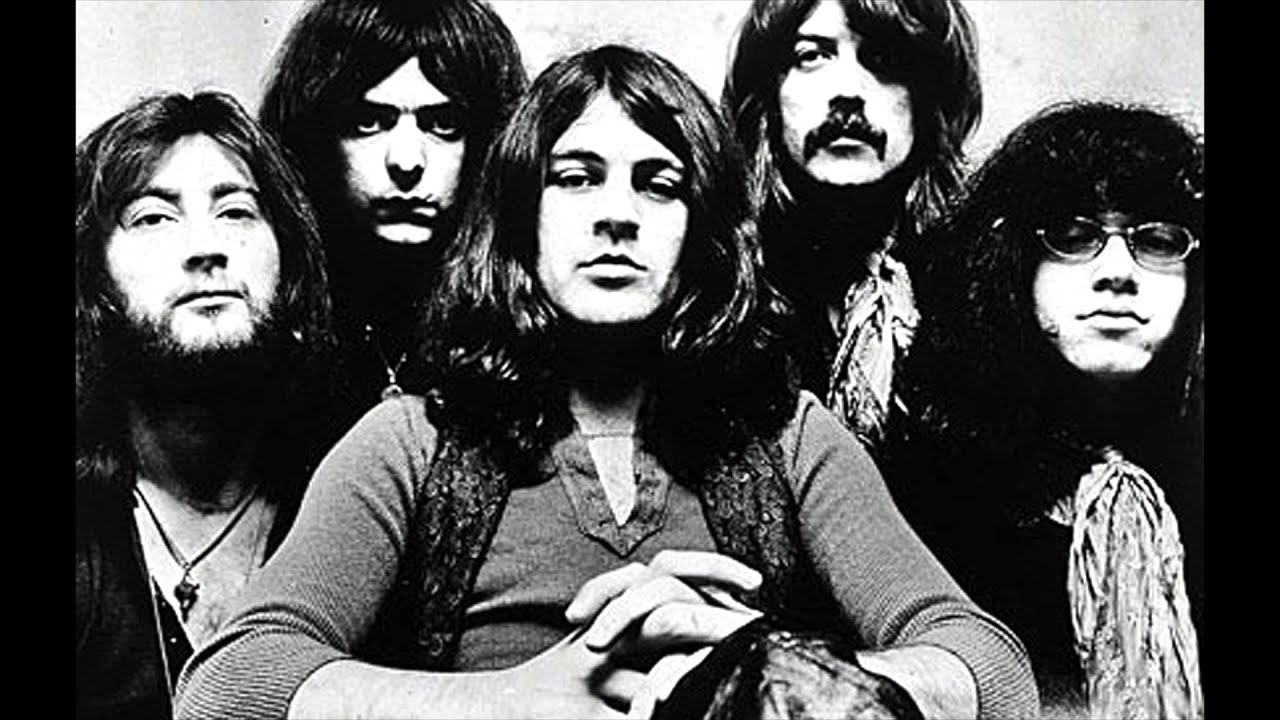 When being interrogated by the cops, Zeb’s alibi is predictably weak, but somehow gets him out of the Shit scot-free. Apparently, Zeb’s mutant powers of persuasion manifested themselves right before we has about to be arrested for espionage. A bit canonically iffy, since mutant powers are supposed to manifest in puberty, but whatever.

Killgrave developed the power to make people do his bidding. He also developed a healing factor, but the former is definitely his calling card. From that point on, he wisely decided to embark on a life of crime, pursuing various ventures in the New York underworld to various degrees of success before being stopped by Daredevil, more often than not. He even had a daughter with the same power and skin tone who ended up becoming a superhero here in Canada. She named herself Purple Girl, which somehow sounds even sillier than her dad’s alias.

In the Netflix show, it looks like Killgrave isn’t going to be a carbon copy of his comic version, being British instead of Croatian and is going to have a fondness for purple suits instead of actual purple skin. Comic fans are going to be mad about this. Because as a comic fan myself, I can say this authority: Comic fans are stupid.

A fact that Michael B. Jordan can testify to.

And if you think that an evil person with that power set would, realistically, use that power for a lot more nefarious purposes than just getting rich… then you’re absolutely right!

Your average high school student from Forrest Hills, New York, Jessica Campbell was a social wallflower who, had a crush on both Johnny Storm (Human Torch) and, believe it or not, her classmate, Peter Parker.

Hard to believe, I know. Look at that disgusting piece of shit.

In fact, she was about to ask him out during a field trip to a laboratory, but then the asshole got himself bitten by a spider or something. He then proceeded to do nothing noteworthy in his life. Nothing at all.

Later that very same day, Jessica and her family embarked on a road trip to Disney World, as her dad’s boss, Tony Stark, had given him free tickets. Everything was looking up all of a sudden!

And then her family’s car crashed into a military convoy carrying radioactive chemicals. Jessica was doused in the chemicals and was knocked into a coma. Her family was, uh, not quite so lucky.

Jessica emerged from her coma around the time the Fantastic Four fought Galactus for the first time, an event that produced a ton of cosmic waves. She was adopted by (And took the surname of) her adoptive family, the Jones’ and discovered that, thanks to some combination of the cosmic waves and the chemicals, she had developed the powers of flight, superhuman durability and superhuman strength.

Ostracized at school and lashing out at Peter Parker when he tried to protect her, Jessica witnessed a fight between Spider-Man and Sandman in her classroom (Don’t send your kids to Midtown High, parents). Inspired, Jessica dyed her hair pink (Like you do) and adopted the codename of “Jewel” deciding to use her powers to fight crime.

Yeah, you wish this was the end of this entry.

In all honesty, Jewel was not all that great of a crime fighter. The biggest accomplishment on her resume was when she accidentally landed on Scorpion, stunning him long enough for the cops to apprehend him.

Jewel’s last crime-fighting stint took place in a restaurant, where the Purple Man had been making people fight each other for his own amusement. Jewel tried to stop him. It…. Didn’t go according to plan…. 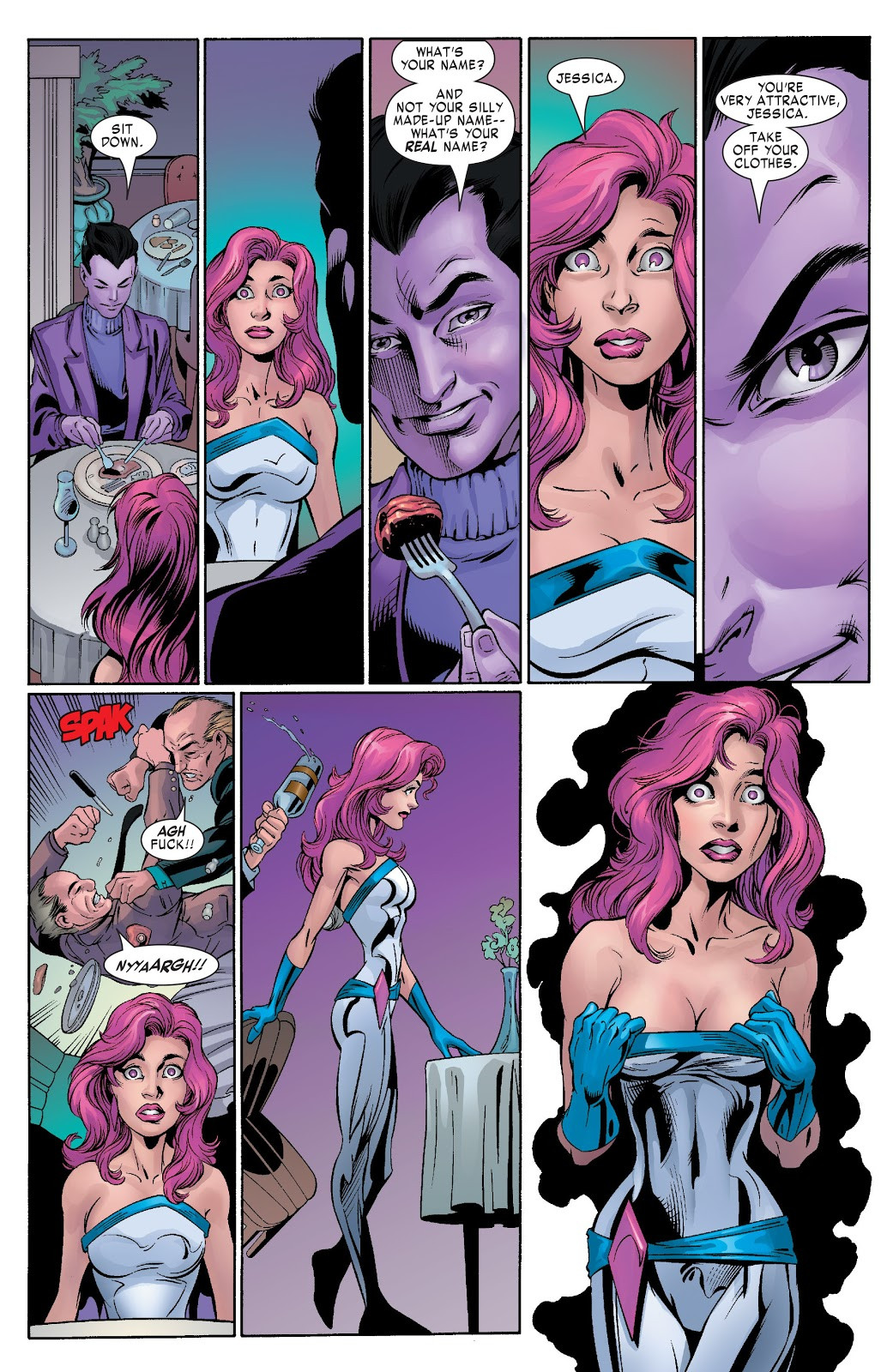 Jessica was held captive by Killgrave for eight months, and believe me, it was NOT a pleasant time to her. I believe this picture tells most of the story. Just try to focus on how ridiculous Killgrave looks and you might forget how dirty you feel looking at this panel.

To be… Well, not FAIR per se, but truthful, Killgrave never raped Jessica. He did however, make her watch as he did sexual things of a non-consensual nature with mind-controlled college girls. Oh, and he also made her beg him for sex. Yeah, Killgrave is literally the worst kind of human being.

I hate purple people. There, I said it. Come at me, NAACP.

Killgrave, who fucking hates Daredevil by the way, ordered Jessica to take him out. Jessica went on her way, but ended up attacking Scarlet Witch instead, as she mixed up their respective red costumes. Scarlet Witch’s Avengers teammates came to her defense, savagely beating the absolute shit out of Jessica… Right as she woke up from Killgrave’s control. And then Vision, Scarlet Witch’s wife, put her in a coma. Another fucking coma.

Jessica Jones is perpetually in need of a hug.

Jean Grey of the X-Men helped her wake up from her, and this can’t be stressed enough, her SECOND violence-induced coma in the space of, what, a few years maybe? Grey also gave her mental blocks, preventing her mind from being controlled ever again. Jessica was offered a role on the Avengers, but well, she responded with a resounding “Fuck You” and who can blame her?

After a brief stint as the vigilante “Knightress” (Whatever the flying fuck that means), Jessica formed “Alias”, a private detective agency. It was during this period in her life that she met Luke Cage, who she had a one-night stand with, and Scott Lang (Ant-Man), whom she dated for a while. Because Jessica’s life can’t ever be simple, she became pregnant with Luke’s child and Scott dumped her. She has the kid, names her Danielle Cage, Luke. She appears as a very central character in the New Avengers series from the end of the Civil War to the end of the Avengers vs. X-Men arc. Since then, good luck finding her anywhere. She kind of insultingly got shoved to the side, although I would expect her to get some more of the spotlight now that she has a TV show coming out.

And to those people that I’ve seen in comment sections out there bitching that Krysten Ritter “isn’t pretty enough” to play Jessica Jones (Whatever the fuck that means): I kindly invite all of you to eat shit.