Disclaimer: Those who get offended by foul language may want to sit this review out. 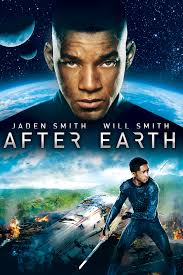 Plot: It is the future, and, as you may have guessed from the title of the movie, human beings no longer live on planet Earth, having caused environmental cataclysms that rendered the planet uninhabitable for people. Attacked by aliens in their new home, Nova Prime, the humans are overwhelmed by the “Ursas”. Huge, blind monsters that find humans by smelling their fear. This is, improbably, the least stupid thing about this movie. Seriously? Couldn’t they just have nuked the motherfuckers into oblivion? I’m no science guy, but I’m pretty sure that nuclear missiles fear nobody.

The human race is slaughtered like cattle until General Cypher Raige (Will Smith) develops the “ghosting” technique, which involves suppressing fear so that Ursas are blinded and easy to dispatch. Under the Fresh Prince’s leadership, the United Ranger Corps defeat the aliens and, years later, Cypher’s son Kitai (Jaden Smith) is training to become a Ranger himself.

When he fails to graduate from Ranger High, due to his highly emotional behavior, Cypher decides to bring his son with him on his last tour of duty before retirement, because a war zone is obviously the best place for a highly emotional teenager to be. This stupidity is compounded upon when we discover that there’s a live Ursa being taken to their destination for some reason that I was too uninterested and bored to look for. Which begs the question: In what fucked-up parallel universe is it a good idea to bring your idiotic, irrational teenage son to a dangerous planet, accompanied by a creature who’s sole purpose is to kill humans who display any emotion?

Anyways, long story short, the ship approaches an asteroid field, and the brilliant general decides to go straight through it instead of turning back. The ship crashes on the now-abandoned planet Earth, everybody except the Raiges are killed, the Ursa escapes, Cypher is crippled, and Kitai has to get to a mountain to shoot a distress flare. Seriously. My six year old cousin could write a better plot outline than this.

My main problem with this story isn’t the boneheaded plot-line, the bland special effects, the horrendous dialogue, or even the beyond-awful acting from the two leads (More on that later). My main beef is with the message that this movie is trying to get across to the audience: “Danger is real, but fear is a choice.” Cypher Raige explains, in a long-winded, boring bout of dialogue, that he believes that while danger is everywhere, “fear is an illusion created by the mind”.

No, it’s not, you fucking idiot.

What we refer to as “fear” is a perfectly normal emotion that warns us when something is uncomfortable or dangerous. One of the reasons that humans haven’t gone extinct is because we’ve had fear in the back of our minds, wondering if attempting to fly was such a good idea. When I go to El Salvador (FYI, I have Canadian and Salvadoran citizenship), I don’t just dismiss my reluctance to enter the slums in San Salvador as an illusion created by my asshole brain, blocking me from living life to the fullest. I listen to my fear, because I’d rather not get murdered for drug money by some 17-year old gang-banger with facial tattoos.

It is VERY easy to figure out who you may want to avoid in El Salvador.

Acting: You gotta give the Pinkett-Smith family props. They try so hard to try to convince moviegoers that the kids in that family (Especially Jaden Smith) are the most multi-talented little  bastards around. Problem is, they’re the only ones buying it. Setting aside Jaden’s (And his sister, Willow) halfhearted stabs at music careers, acting seems to be what they’re trying to jump into. Jaden appeared with his dad in 2006’s The Pursuit of Happyness, and appeared subsequently in The Day the Earth Stood Still and the Karate Kid remake. Was After Earth finally going to be the performance where Jaden established himself among Hollywood’s elite at the age of 14?

No. Of course not. Make no bones about it, Jaden Smith’s acting gave me nightmares. And not in a “Holy shit, I’m gonna be dreaming about Hannibal Lecter dismembering me for the next thirty years” sense. The first thing I did after finishing this movie was go upstairs and start praying to any deity who exists and/or who gave a shit and pray that this kid never touches the Star Wars franchise. I’m not even religious! I just hope for his sake that his star fades quietly so he doesn’t open himself up to any more embarrassments,  but it’s unlikely, considering the pressure his family seems to be putting on him.

Speaking of his dad, I hoped that his performance would be better than advertised, because I’ve always been a big Will Smith fan, but his performance just left me depressed and longing for the days of The Fresh Prince of Bel-Air. He’s just so damn wooden in this movie. Actually, scratch that, he looks depressed. Uninterested. Like he’s aware of all the nepotism in this project and he’s ashamed of it. Of course, it could just be that he knows that the movie was a piece of shit, but I like to think that he knows he made a mistake and can learn from it.

Although I could be wrong.

What Razzie Nominations Does It Deserve?