(This is a continuation of this post. I would have published this one earlier, but I was too busy writing this article and not giving too much of a damn about the MLB draft. Also, the Biogenesis thing.)

So, on June 4th, MLB.com released the current standings for the National League all-star votes. The NL voters (Aside from the Giants fans) seem to be less of the ballot stuffing variety then the AL voters. (Or maybe they`re just being more discreet about it.)

Nothing to complain about here. It`s pretty much a toss-up between Posey and Molina (Though I`d expect a slight edge to Yadi.) Otherwise, I`m pretty much indifferent to the 3-5 rankings since, aside from McCann, they aren’t having All-Star caliber seasons in the least.

Look, I like Brandon Belt, all right? I’ve always been a fan of the low power, strong fielding first baseman. I saw a fair bit of him watching the (Incredibly dull) World Series last year, and I think he`s definitely a big leaguer. Also, his nickname is Baby Giraffe.

Everyone is required to like him after seeing this photo. Even you, Dodger fans.

But for the love of God, will someone please tell me what the hell he`s doing in front of Paul Goldschmidt? I mean, just fucking look at Paul Goldschmidt’s stats! Holy shit! That is a far cry from Brandon Belts’ average (.242) and OPS (.731). Admittedly, I voted for my fellow Canadian boy Joey Votto (Who is also excellent) but I will probably change my vote whenever I next feel like voting.

For all of Brandon Phillip’s cockiness, he is still one of the best offensive second basemen in baseball, and maybe the best defensive one too. I love Marco Scutaro too. You can`t argue with a .323 batting average, and it’s impossible for me to not cheer for an ex-Blue Jay either. 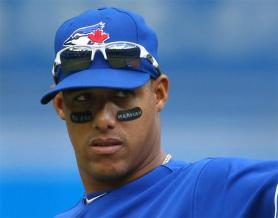 So what`s the problem?

Well, neither of them have been as good as Matt Carpenter.

One look at Troy Tulowitzki’s stats will tell you that he deserves to start the All-Star game at shortstop for the National League. You may be able to put together a convincing argument for Jean Segura, but I`d still go with Tulo any day of the week.

While we’re on Segura, though, what exactly is Brandon Crawford doing ahead of him? Come on Giants fans, it’s not funny anymore. Crawford`s stats are nice, but are nowhere near nice enough to justify his standing ahead of Jean Segura.

If All-Stars were judged on defense and defense alone, then Andrelton Simmons and Pete Kozma would be closer to the top of this list, but sadly, their sup-.700 OPS’s likely spell doom.

Finally, a category in which you could make a solid case for any guy to be #1! However, as you can see, the fans are quite clearly uninterested in 3-5 and are focusing on the two (In one case, literally) big guys.

The most lovable obese ball player not named David Ortiz…

At some point, non-Yankee fans agreed to pretend that this never happened.

… Has evolved into a perennially solid All-star case. While his numbers aren’t exactly eye-popping, they will be enough to at least get him a reserve spot on the team.

David “Captain America” Wright has been more or less his usual self this year, (Though he is in a cold spot right now) this year. In my personal opinion, I would pick Wright over the Panda, because Wright is having a marginally better offensive season and is miles better defensively.

It takes a lot for me to hate a ballplayer (See: Escobar, Yunel) but Ryan Braun really does suck. I really hope he gets that 100-game suspension (Though I highly doubt that). Baseball already has a reputation as a juicer sport, and this asshole isn’t helping.

That said, he is having another good season, and I voted for him. While he’s cooled off some what, he should be able to make his sixth all-star appearance. (Barring a suspension, I mean)

I also voted for Bryce Harper, though who knows if his balky knee will permit him to play in the Game.

Overall, these standings are pretty sketchy. Justin Upton does NOT deserve a starting spot (It doesn’t help that  he hasn’t hit a homer since May 17th, either) and Shin-Soo Choo is a reserve too, in my eyes. Neither Gregor Blanco, nor Angel Pagan (Goddammit, Giants fans!), nor Matt Kemp and especially not B.J. Upton deserve to be All-Stars. And for fuck’s sake, can somebody show Carlos Gomez and Carlos Gonzalez some love, already?

Well, that`s all until the next ballot update. Expect to see either a in-depth analysis of the Korean Crisis or a love letter to Ramon Ortiz next.